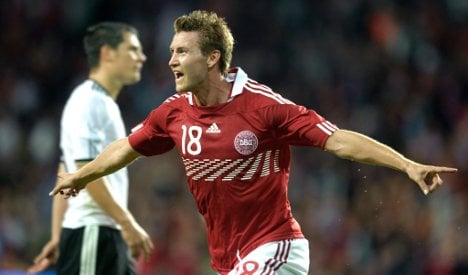 Junker created one for veteran Dennis Rommedahl and scored the leveller four minutes from time after Germany had gone 2-0 up through Mario Gomez and Patrick Helmes.

Germany fielded a side made up of bit-part players from the team that finished third at the World Cup and others who didn’t make the trip to South Africa.

German coach Joachim Löw, who extended his contract for two years on July 20 after guiding a vibrant German team to the last four of the World Cup, said he was pleased with the performance.

“I saw some nice things, I am satisfied, there was a lot of dynamism out there and real hunger to our game, the team functioned well as a unit and created some nice chances,” said the 50-year-old.

However, his view of the match was sharply contradicted by a fuming Gomez.

“We should not have allowed this match slip from our fingers when we were leading 2-0,” he said. “The goal that brought it to 2-2 was an individual effort. Denmark created chances but that is normal, because we have never played together before and we will never play together again.”

Germany took an early lead through Gomez, who was used as a substitute during the World Cup despite being Bayern Munich’s record signing, after he seized onto Thomas Hitzlsperger’s pass and slotted the ball past ‘keeper Thomas Sorensen in the 19th minute.

Hitzlsperger’s first-half performance will certainly have pleased West Ham manager Avram Grant as the 28-year-old, who has previous experience in English football with Aston Villa and was snapped up on a free transfer from Lazio in the summer, was at the centre of most of Germany’s creative play.

He also went close himself to doubling the lead in the 40th minute but his effort went just wide of the right hand post.

The Danes, who had a poor World Cup, failing to progress from the group stages for the first time, offered little initially but came back into the game more towards the break with Rommedahl at least forcing Tim Wiese into a save.

Wolfsburg’s Simon Kjaer and Liverpool’s Daniel Agger also had efforts which signalled a more adventurous approach from the Danes, though, Wiese was not forced into saving either.

Germany started the second-half the brighter and another of their young prospects Marko Marin got in a shot but Sorensen was equal to the task. Marin was soon to be taken off and replaced by Aaron Hunt, shortly after Denmark had gone close to levelling the encounter when Agger’s shot hit the post in the 55th minute.

Hitzlsperger forced Sorensen into a save on the hour mark and Gomez should have done better than drag his shot from well inside the penalty area.

The Germans deservedly got their second in the 72nd minute as Helmes rifled the ball home after being set up by the industrious Kroos.

Denmark reduced the deficit two minutes later when Rommedahl beat Wiese with a shot after a good piece of work by Junker.

It was to be Junker, sent on in the 54th minute, who grabbed the draw four minutes from time as he shot past Wiese from inside the area to complete a fine comeback from the Danes.