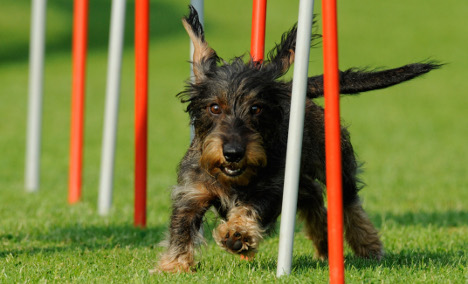 A wirehaired dachshund at a dog agility event. Photo: DPA

The late wirehaired sausage dog, as the breed is popularly known, was informed by mail on July 30 that the GEZ licence authorities had determined she now earned enough money to pay fees for public TV and radio.

“All of my memories came rushing back,” his 20-year-old owner Jennifer Pyka told daily Bild this week. “I cried and tore up the letter in a rage.”

The political science student had been devastated when she was forced to have the dog euthanised years ago, she told the paper.

“At least the GEZ has since apologised and removed Bini from their databank,” she said. “But I’m still totally angry that something like this can even happen.”

The Cologne-based GEZ, which stands for Gebühreneinzugszentrale der öffentlich-rechtlichen Rundfunkanstalten in der Bundesrepublik Deutschland, or “Fee-collection Centre of Public Broadcasting Institutions in the Federal Republic of Germany,” admitted to news agency DPA that Bini’s case was not the first such mistake.

“It has happened before,” said Andreas Müller, spokesperson for GEZ’s fee collection department at the Bavarian public broadcaster Bayerische Rundfunk.

Dogs and cats manage to get into the database because their owners sometimes register them for mail-order contests or on internet address books, he explained. And because the GEZ employs an outside company to find the names of those who qualify to pay fees, some non-humans slip through, Müller said.

Bini’s case will be investigated at the GEZ headquarters in Cologne.

“It was a chain of unhappy circumstances,” spokesperson Müller said, adding that Bini is not a well-known dog’s name because it is also used as a nickname for the popular German name Sabine.

“We are infinitely sorry,” he added.