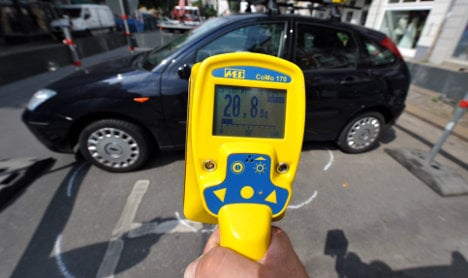 The street had not been dug up for the past 20 years, explained Robert Rath, spokesman for the state office for occupational health and safety, according to a report in daily Die Welt.

The material, a small amount of Caesium 137, had been taken to the Helmholtz Zentrum Berlin, a research centre that also serves as the main collection point for radioactive waste, the paper reported.

It is being more closely examined there. The Berlin police’s bureau of environmental crime was investigating the possibility of illegal waste dumping, a spokesman said.

The officers wanted to clarify the origin on the material, which was discovered on Sunday beneath the asphalt on Stargarder Straße in Prenzlauer Berg.

Caesium 137, a radioactive productive formed by nuclear fission and used in medical radiotherapy, is water soluble and can be harmful in small amounts if ingested or if a person is exposed for long periods.

The material was found fortuitously by a German Red Cross car that was on a test drive. The car carries a device that detects dangerous radioactive, chemical and biological material.

The site was initially enclosed by metal blocks that muffle the radiation. But the street was then dug up by radiation experts and the site investigated. Radiation leak tests then zeroed in on the object.

According to daily Süddeutsche Zeitung, the state office for occupational health and safety insisted there had been no danger to the public. A person would have to stand for 50 hours on the spot with the highest radiation dose for it to be harmful, they said.

“There is no reason to panic,” said Jens-Holger Kirchner, a Greens city councilor.