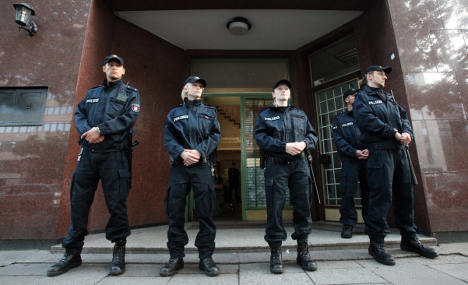 “We closed the Taiba mosque today because young men were converted to religious fanatics there. A purported cultural association shamelessly exploited the freedoms of our democratic state under the rule of law to recruit for holy war behind the scenes.”

Three of the September 11 hijackers including their ringleader Mohammed Atta, who piloted the first plane into New York’s World Trade Center, met regularly at the mosque before moving to the United States.

The prayer house was known as Al-Quds until two years ago.

Authorities said it served for several years as a recruitment centre for fellow jihadists, including accomplices of the hijackers, and offered logistical and financial assistance to Islamic militants.

Twenty police officers searched the mosque and homes of the association’s leaders in the early-morning raid and confiscated funds from the group.

“We have finally put an end to the spectre behind the walls on Steindamm,” said Ahlhaus, referring to the street where the mosque is located.

The mosque, with about 45 members, was still the main meeting point for Islamic extremists in the city, according to Hamburg authorities.

Between 200 and 250 people usually attended Friday prayers including Arabs,

Its current imam, German-Syrian national Mamoun Darkazanli, is wanted by Spanish authorities as a suspected Al-Qaeda operative with alleged links to the cell behind the 2004 Madrid train bombings that killed 191 people.

Germany has refused to extradite him following a ruling by its highest court, and dropped its own case against him in 2006 for lack of evidence.

Earlier this year, German media reported that the CIA had singled Darkazanli out for targeted killing. The claims were never confirmed.

In a case officials described as decisive to the closing of the mosque, 10 men who regularly attended the prayer house travelled to the border region straddling Afghanistan and Pakistan in March last year, probably to attend militant training camps.

They are under investigation by German prosecutors on suspicion of founding a terrorist organisation.

At least one of the men joined the radical Islamic Movement of Uzbekistan in Pakistan and later appeared in a German-language propaganda video for the group in which he called for Muslims to take part in holy war.

“We do not tolerate organisations that are levelled against the constitutional order and the idea of understanding between cultures in an aggressive, militant way. But I underline that these measures are not targeted against the majority of the peace-loving, law-abiding Muslims in Hamburg.”

Ahlhaus said the association had a sophisticated programme of courses, sermons, seminars and online publications to whip up hatred of “non-believers.”

Germany, which opposed the 2003 US-led invasion of Iraq but has some 4,500 troops in Afghanistan, has beefed up security and surveillance in response to the threat of attacks on its own soil.

In March, four Islamic militants, including two German converts to Islam, who dreamed of mounting “a second September 11” were jailed for a thwarted plot to attack US soldiers and civilians in Germany.