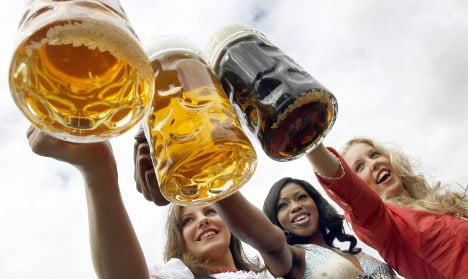 Bier, pivo, biere, cerveza…tastes good no matter how you say it. The world’s largest beer garden stretches for 1,600 meters along Karl Marx Allee this weekend. This year’s feature city is Vietnam, so be sure to try the Sabeco, Habeco, Saigon, and Hanoi Beer.

German and Japanese artists have always rippled the art waves. For this new exhibition, twenty-eight artists from Tokyo and Berlin were asked to create spaces for “developments and conversations” that went beyond the realm of your typical gallery show. Pieces like the “Never Ending Breakfast” and “Painting a bee by a bee for 5 days” developed. Join the eclectically creative party at Saturday’s opening.

Summer of Music and Art Festival

Pump up the jam. With Technotronic (MC Eric and Ya Kid K) kicking off the SOMA festival Friday night, you know this is going to be one dance party extravaganza you can’t miss. The 1980s producers are joined by Kollektiv Turmstrasse, DJ Toy Selectah, Lucio K, and a whole host of international party makers for one wicked weekend.

The human body is capable of extraordinary things. Witness the strength, balance, flexibility, and creativity of seven acrobats, circus performers, aerialists, and trapeze artists at Cologne’s Senftöpfchen Theater. Catch master juggler Stephan Masur and his impressive troupe before they skip town on Sunday.

Bono and the boys are back on the road, and they’re taking the notion of a stadium concert to a whole new level. The pioneering rockers perform on a 360-degree stage, beneath a massive, futuristic “claw.” The 360 Tour makes three stops in Germany. Catch the first one in Frankfurt Tuesday.

The Austrian artist has cast his large-scale designs on buildings, walls, windows, and gardens. He doesn’t simply create something fascinating to look at, he invites the onlooker to actively engage. His latest piece, “Projection,” on view at the Schirn Kunsthall Frankfurt, utilises 12 projectors to form a 360-degree grid that develops into amorphous lines.

At 70, this legendary crooner is a master of country, soul, and R&B. And he’s been inspiring audiences across Europe this summer decked out in a sequined vest and sparkly pants. Special guest Joss Stone joins Mr. Burke and his sensational Souls Alive Orchestra, Saturday night in Hamburg.

The Austrian photographer has a thing for the stage and the set. He’s shot everyone from the clown Franz Joseph Bogn to the singer Nina Hagen and the film director Rainer Werner Fassbinder. See a collection of Rittenberg’s dramatic black and white portraits at Galerie Kampl’s exhibition opening Thursday night.

Great Art Exhibition – In the House

There are two major factors to consider with every house. First, there’s the outer appearance, its architecture structure. Then, there’s the inner workings. The living that goes on behind those big bay windows, beneath those pitched roofs. Both play big parts in this year’s Grand Art Exhibition, which begins Wednesday in Munich.