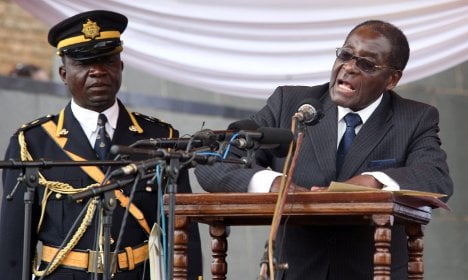 The envoys from Germany, the European Union and the United States left early from the funeral Sunday for Sabina Mugabe, which foreign minister Samuel Mumbengegwi said was “unacceptable and will not be tolerated.”

“Your conduct was therefore very disrespectful to our national heroes’ shrine, the heroine who was being honoured and his excellency the president,” he said in a statement. “We are disappointed that you chose such a bad occasion to show your disrespect for Zimbabwe, its leaders, its fallen heroes and its people.”

On Sunday, Zimbabwe’s veteran leader lashed out at the West for maintaining sanctions on Zimbabwe and meddling its politics.

“They say ‘remove so and so,’ Of course they mean ‘Mugabe must go before we can assist you,” Mugabe said at burial of his sister. “To hell with them. Hell, hell, hell with them whoever told them they are above the people of Zimbabwe that they decide what Zimbabwe should be and by who it should be ruled.”

Mumbengegwi said the diplomats had left shortly after Mugabe’s speech, despite that a programme had been provided to them which “clearly indicated” when proceedings would come to an end.

“If you decide to attend such functions in future, you are expected to show respect and observe the protocol befitting these important occasions.”

However, US ambassador Charles Ray said he left because he could not stand the attacks from Mugabe.

“When America is treated in the manner it was treated on Sunday, I will react,” Ray told reporters.

Relations between Harare and Western capitals have been tense for 10 years since elections marred by violence and widespread allegations of human rights abuses by Mugabe’s government.

In February, the EU renewed sanctions against Mugabe and his inner circle for another year, citing a lack of progress in implementing political and human rights reforms.