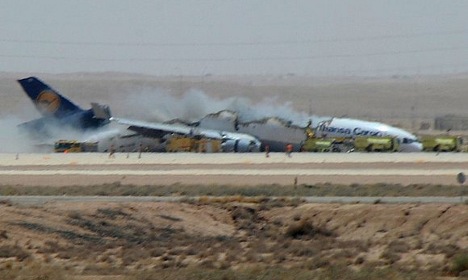 Both pilots suffered minor injuries and were immediately hospitalised.

“The captain and the co-pilot are in good health; they only had minor injuries,” Khalid al-Khaibri, a spokesman for the Saudi civil aviation authority told AFP.

The German airline said “it is not yet known exactly what type of freight it was or which customers are affected. The cause of the accident is still being investigated. At the moment, we have no further details.”

However, Khaibri told AFP the pilot reported to ground officials a fire in the cargo hold of the aircraft before landing at Riyadh’s King Khaled International Airport.

“The captain informed the tower that there was fire in the back of the plane,” he said.

The airport immediately put ground rescue and fire teams on alert, he said.

Saudi-financed news channel Al-Arabiya said the aircraft broke in two on landing after smoke was seen coming from it as it approached the airport.

Civil defence teams put out the fire later, and the news channel said flights at the airport were resumed a short while after the incident.

“The aircraft is totally finished,” an airport ground services official told AFP, declining to give his name.