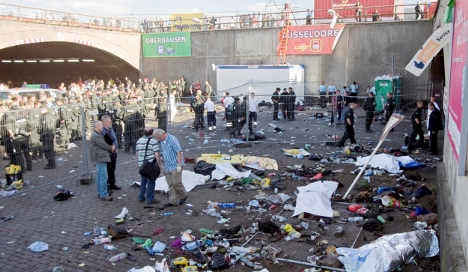 Aftermath of the disaster at the tunnel. Photo: DPA

“It is the fault of the organisers,” he told the Berliner Kurier newspaper Sunday edition.

“It is just about making money; the organisers did not show the slightest feeling of responsibility for the people.”

He said it was a scandal that there was only one entrance to the final party area where so many people were expected.

Police sealed off the tunnel to enable investigators to examine the scene while eyewitnesses told reporters what they had experienced inside it.

“There were just too many fences,” he said. “Everywhere it was just far too narrow. Several girls collapsed because of the heat. Totally crazy.”

Taggart Bowen-Gaddy, a 20-year-old American from Philadelphia who is studying in Metz, France, said there were a few angry incidents in the tunnel as panic took root, but that generally people were trying to help each other.

“A lot of people were very afraid. Some were crying, probably they were on drugs. Some guys got angry, protecting their girlfriends. But overall people wanted to help each other. Everyone just wanted to get out.”

Some people turned up at the tunnel on Sunday morning to lay flowers and light candles, while locals also weighed in with criticism of the organisers.

“I cannot understand such stupidity,” said Richard Hatenkerl, who lives nearby. “My brother was at the main event with his girlfriend. If the panic had broken out just five minutes before it did, he would probably be dead. Those responsible must face justice.”

Another Duisburg resident Britta Kordel said she had seen the mass of people heading for the disused rail depot from her flat.

“They were pushing and shoving from behind,” she said, adding that they should never have been allowed into the tunnel. “Even we as locals do not like going through that tunnel.”

It was no surprise to her that such a disaster happened. “All Duisburgers said it should not be allowed to take place here,” she said.

Forlorn ravers were still to be found at Duisburg train station on Sunday morning, having slept there for a few hours after the party, while a few parents were seen walking around holding photos of their children, trying to locate them.

“Our horror at the terrible accident at the Love Parade in Duisburg has left us dumfounded,” said Kraft.

The young people had come to Duisburg to celebrate, but instead there was death and injury, said Merkel. “My sympathy and sorrow is with them,” she said.