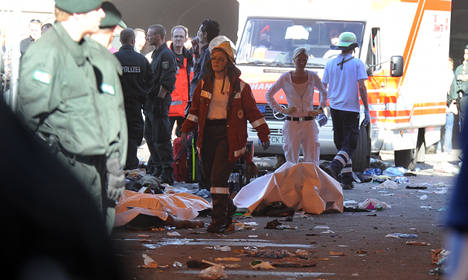 Another 100 people were lightly injured in the incident. Nine of the dead were women and six were men, police said.

Organisers said 1.4 million people had turned out for the day-long open-air festival in Duisburg, a city of 500,000 just north of Düsseldorf, with most of them unaware of the incident, the NTV television network reported.

The tunnel led to a disused freight railway yard where the festival was taking place. It was not immediately what sparked the initial panic.

Fearing further mass panic, local officials opted against an immediate evacuation of the festival grounds where tens of thousands of revellers were still gathered late in the afternoon, a city spokesman said.

Television footage showed emergency personnel working frantically at the tunnel while a line of revellers filed away slowly from the scene.

Dozens of ambulances and emergency vehicles were parked nearby, while medical tents had been set up. Several helicopters had landed on an elevated motorway bridge near the scene, which police had closed off with bollards.

First held in Berlin in 1989, the Love Parade is one of the biggest techno festivals in Europe, featuring world-renowed DJs spinning their turntables onstage as fans dance and throb to the beat.

It moved from Berlin from 2007 onwards after disagreements with the city authorities over logistics and security and has been held in several other German cities in recent years.

Deadly stampedes of this kind are rare in Europe but have happened elsewhere in the world in recent years.

In May 2009 11 people were killed, most of them women and children, in a stampede at a world music festival in the Moroccan capital Rabat, which featured such pop stars as Kylie Minogue.