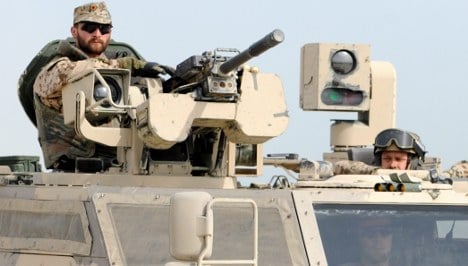 Hellmut Königshaus, Parliamentary Commissioner for the Armed Forces, demanded that security come before rules and regulations as he squarely blamed continuing bureaucratic obstruction for the lack of progress on equipping the Bundeswehr troops.

Urgently needed mine-sweeping vehicles and ambulances, for instance, could not be bought because they did not meet German registration standards, Königshaus told daily Sächsische Zeitung.

On the whole, the equipment issue had reached the dimensions of “a drama,” said Königshaus, who is also an MP with the pro-business Free Democrats. As well as vital equipment, soldiers were also missing such simple things as furniture in their quarters, camp beds, and combat and practice ammunition, Königshaus said, adding that soldiers felt neglected.

“We have to distinguish between danger in everyday life, for which our German standards are intended, and the dangers that exist on a deployment through shelling or explosions,” he said. “Therefore there has to be a regulation that says: if the protective effect on a mission is higher than the risk of injury in everyday life, then the protective effect has to take priority.”

For example, an ambulance based on the “Dingo” troop carrier had not been approved for the Bundeswehr because there was not sufficient head room inside. The same vehicle was, however, deployed by the Austrian military.