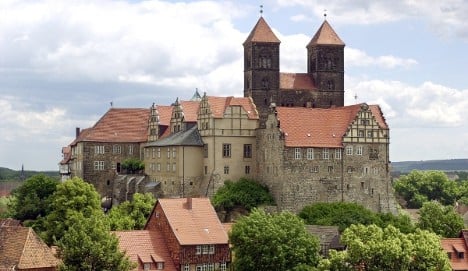 Quedlinburg’s architecture is hard not to find fascinating. The buildings constantly snatch attention away from ones feet – which can be a hazard seeing as many of the town’s streets are cobbled and lumpy.

But as long as one can keep largely upright, this charming little place tucked away in the bucolic Harz region in central Germany, is a many-splendored delight.

Quedlinburg, a couple of hours southwest of Berlin, is a UNESCO cultural heritage site and rightly so – it’s like wandering through an open-air museum except that intriguingly, is lived-in and unfinished.

The houses in the inner, older part of town are nearly all half-timbered. Numbering more than 1,300, they are in various states of collapse, renovation and pristine condition.

Those with an eye for such things can play games spotting the different kinds of half-timbering, while others can simply marvel at the massive, aged, pieces of wood used in the construction and the fact that it all still stands, even at some crazy angles.

There are a number of guided walking tours which can include historical explanations, more detail on the half-timbered houses, and even a night-time one conducted by fully-costumed night watchman who tells tales relating to specific buildings – some more reliable than others.

But a walk around the crooked streets of the town centre can easily be done alone, starting from the central square with its ancient Rathaus, or town hall.

“It’s very pretty to walk around all the old houses, you get a feeling of almost going back in time,” said British weekend visitor Dan Paton. “And you can see that a lot of care and attention has been put into keeping the place historically correct. It just oozes history.”

Best to make a specific trip to the square for the Saturday market, where there is even a stall selling “biodynamic” fruit and veg, next to more conventional produce such as bread, an array of pickled cucumbers, local cheeses and meats of all kinds.

En route up to the castle, a measure of self control is required to delay a visit to the specialist cheese cake café until afterwards – there are a hundred varieties, served in alarmingly large slices. But the short, sharp climb can be rewarded with cake afterwards – and is better undertaken without the extra ballast.

The castle complex is actually an abbey and accompanying basilica. Heinrich I, considered the founder of the mediaeval kingdom leading to the Holy Roman Empire, is said to have been crowned at the bottom of the hill, while he and his queen, Mathilde, were buried in the basilica.

This lent Quedlinburg huge import during the Middle Ages, and the abbey Mathilde founded was later granted large areas of political independence by Otto I, and then rights to mint its own money and impose taxes by Otto III. A bit of mediaeval feminism, if you will.

The town’s basilica, the Stiftskirche St Servatius – dates back to 1129, but there is evidence of three previous buildings on the site. There are fascinating for its traces of early religion, with the tops of pillars carved with animal representations not normally associated with a Christian house of worship.

A more familiar sense of church life is found in the abbey, also in the castle complex – a 16th and 17th century building where the abbesses lived, studied, ruled and taught.

A row of them are portrayed in pictures hung along one long room – the realism of their ugliness perhaps reflecting their position – like kings, they had no need to be kind to the eye, for they were educated and held power.

More prosaic pleasures can be sought back in town, in the range of art and craft galleries and shops as well as the small range of pleasant eating places in Quedlinburg, including a fine Italian called Antica Roma, the Palais Saalfeld if you want to push the boat out, but also the cute Flammkuchen bistro Himmel und Hölle (which also has holiday flats).

“The town is big enough to have plenty to offer, the locals are very friendly and there seems to be a lot going on – I saw a variety of live bands playing in pubs and bars on a special music night,” said Paton after his visit.

It is worth getting out of town too if one has the time, as the surrounding countryside is gorgeous – and a trip up towards the mountains is definitely worth it, to experience the rocky outcrops and gorges which inspired some of Goethe’s musings as well as ancient tales of witchcraft.

An eclectic trip to Quedlinburg would not be complete without a trip down the road to nearby Halberstadt for the glorious madness that is the John Cage ‘As Slow As Possible’ performance. This composition being performed on an organ will take a mind-blowing 639 years to complete.

At any one time it seems to be no more than a droning note or cord coming from a small organ in an old church, but hundreds of people gather when every few months the next note change is expected.

Of course, Quedlinburg’s ancient history and houses have already stood for longer than it will take the Cage piece to be played, so time in the Harz can become relative quite quickly.