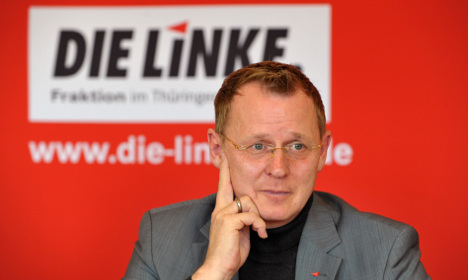 The decision overturns a ruling by a state court in North Rhine-Westphalia, which had said it was not appropriate for Germany’s intelligence agency the Verfassungsschutz to be gathering a file on The Left’s Thuringia state party leader Bodo Ramelow.

Domestic intelligence officials consider parts of The Left’s agenda against Germany’s constitution, and the ruling by the federal court in Leipzig is a major setback for the far-left party’s efforts to stop the government surveillance of its members.

“I cannot accept that the intelligence service legitimises itself in this way,” Ramelow told daily Mitteldeutsche Zeitung ahead of the proceedings.

Ramelow said that all of The Left’s federal parliamentarians are under watch by the Verfassungsschutz, calling the situation “scandalous.”

But Hans-Peter Uhl, interior policy spokesperson for the conservative Christian Democrats’ parliamentary group, said the far-left party was a risk to the state – though he made a distinction between the party its and democratically elected parliamentarians.

“Basically The Left should be observed because there’s a constant flow between the party and left-wing extremists and some violent groups,” he told the paper, adding that the intelligence service should exercise caution when it came to those who legitimately held an office.

“Those are freely elected parliamentarians,” he said. “There needs to be a demarcation here.”

Meanwhile Green party leader Cem Özdemir said he supported the case by The Left, encouraging an end to the surveillance.

“I find that equating the Left with the (neo-Nazi) NPD or other extremist parties is a mistake overall,” he told daily Berliner Zeitung.

The Left is not conspiratorial, he said, explaining that its members openly engage in their activities and should also be judged as such on the political stage.