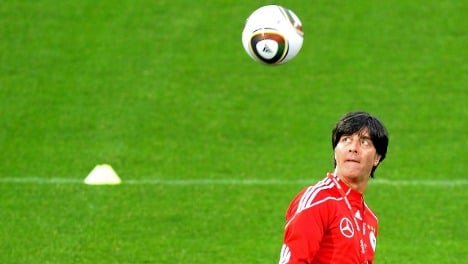 Löw, team manager Oliver Bierhoff and assistant coaches Hans-Dieter Flick and Andreas Köpke signed on with the German Football Federation (DFB) to 2012, when the European championships will be held.

The 50-year-old chief coach called the negotiations “uncomplicated,” without revealing details, and thanked DFB President Theo Zwanziger for his vote of confidence.

“We had a whole lot of fun at the World Cup and are looking forward to the work ahead,” Löw told reporters in the western city of Frankfurt, adding that he had informed a few of the players of his decision by text message.

“Many of them wrote back and congratulated me,” he said.

Germany finished third in the World Cup in South Africa, demolishing England 4-1 and favourites Argentina 4-0 before losing 1-0 to eventual champions Spain in the semi-finals. They then beat Uruguay 3-2 in a third-place playoff.

Löw has won 38 out of 55 matches since he succeeded Jürgen Klinsmann after the 2006 World Cup, taking Germany to the runners-up spot at Euro 2008.

Zwanziger said Löw had proven his knack for bringing the best out of Die Mannschaft.

“We now have an excellent foundation to achieve our most important targets,” he said.

“We have young, talented players, some of whom were playing at a world-class level in the last few weeks during the championships. We have an excellent nurturing programme for next-generation players. And we have a coach who fits perfectly with the team.”

Löw’s four-year deal expired on June 30, and talks over a new contract for him and his entire backroom staff broke down in February over financial details and Löw’s desire for more control over the Under-21 side.

Germany’s first qualifying match for Euro 2012, to be held in Poland and Ukraine, will be against Belgium in Brussels on September 3.