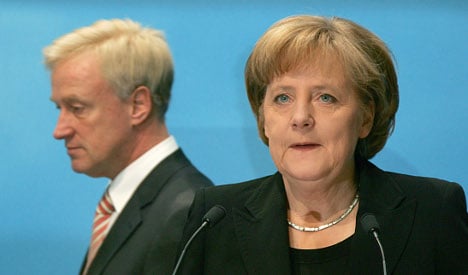 Ole von Beust, leader of Germany’s second-largest city, which is also one of 16 regional states, announced he was quitting in August for personal reasons with another three years to go in his term.

He is the sixth conservative state premier to leave his post in 10 months, and follows the shock resignation of President Horst Köhler in May over remarks linking Germany’s Afghanistan mission to national economic interests.

In a joint statement to reporters, Merkel thanked von Beust for his service while he insisted he was leaving “bearing no grudge”. But the two took no questions at what was announced as a press conference.

A political moderate, Beust was a valuable asset to Merkel, with a proven ability to draw urban voters to her Christian Democratic Union (CDU) in a traditionally left-wing city.

Merkel, Forbes magazine’s most powerful woman in the world four years running, had already been facing serious questions about her leadership due to sinking poll numbers and incessant back-biting in her centre-right government.

Veteran CDU deputy Wolfgang Bosbach said the rash of departures, albeit for various political reasons, “created the impression of a process of erosion,” in remarks published by the website of the Handelsblatt business daily.

The leader of the opposition Greens’ parliamentary group, Jürgen Trittin, crowed: “Everyone has been driven to despair by Angela Merkel.”

The German press said the air was getting thinner for her.

“Angela Merkel has lost a long-time friend, someone whose advice she trusted, whom she listened to, someone with political heft,” the mass-selling daily Bild said. “Governing won’t get any easier for her.”

The centre-left daily Süddeutsche Zeitung said many of the state leaders who had walked away had done so because of a sense of disillusionment with Merkel and pessimism about the party’s prospects.

“This is also a blow for Merkel and the federal CDU,” it said of Beust’s resignation. “We are left with a chancellor who is losing her men, and the question of why more and more politicians are fleeing politics.”

According to two polls released last week, only 31 to 33 percent of voters support the CDU and just five to six percent back the pro-business Free Democrats, Merkel’s coalition partners in Berlin since she won a second term last September.

The opposition Social Democrats have gained ground to between 30 and 32 percent, now running neck-and-neck with the conservatives.

Beust, 55, was a centrist like Merkel who became the first conservative state premier to openly acknowledge his homosexuality, albeit after being “outed” by a rival.

He had led the city-state since 2001 after a bitterly fought election days after the September 11, 2001 attacks in the United States, which were planned and carried out in part by an Al-Qaeda cell based in Hamburg.

In 2008 he formed with Merkel’s approval the country’s first alliance between the CDU and the ecologist Greens party – an intriguing tie-up that analysts say could serve as a model one day on the national level.

But Hamburg, the richest city in Germany, has run into trouble with its public finances of late – most recently seen in the runaway costs of a spectacular symphony hall whose construction is under way. And Sunday, he saw one of the centrepieces of his political programme – a reform of the city’s school system – defeated in a referendum.

Merkel’s biographer Gerd Langguth noted that the one advantage to the 56-year-old chancellor of the growing dearth in seasoned CDU personnel was that she had fewer potential challengers.

“And partly because of that, Merkel is still firmly in the saddle,” he said.