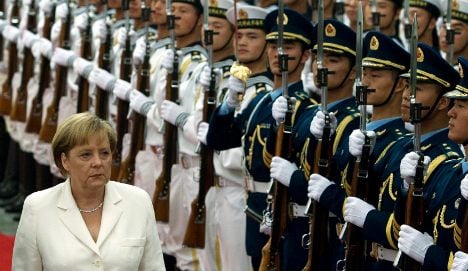 After meeting Premier Wen Jiabao and overseeing the signing of the agreements covering trade, energy and culture, Merkel said she had emphasised German wishes for greater openness in the world’s third-largest economy.

“Chinese companies, like those of many other countries, enjoy very good access to the German market. We hope that German enterprises can enjoy the same access to the Chinese market,” she told reporters.

Trade between the export powerhouses has grown rapidly – to $91 billion last year, up from $41 billion in 2001, according to Chinese data.

However, in the past few years, the trade balance has tipped decisively in China’s favour, with Chinese exports to Germany totalling $55 billion last year, while trade in the other direction amounted to $36 billion.

“Neither Germany nor China pursues a trade imbalance,” Wen said during a joint press conference after their talks. “We hope that trade can be balanced and orderly.”

China overtook Germany last year to become the world’s top exporter, with some $1.2 trillion in merchandise exported, according to World Trade Organisation figures. Germany exported $1.12 trillion of goods in 2009.

Merkel also said China still had not satisfied all the requirements for attaining market economy status in the eyes of Europe, a designation expected to lessen the occurrence of trade actions being taken against China.

She said Beijing still had to do more to ensure the protection of intellectual property rights and market access.

“From the standpoint of market access, we very much hope that Germany, in entering China’s market, can receive equal treatment,” she said.

However, Merkel described her talks with Wen as “friendly”, while both sides they would work for an even closer trade relationship.

Among the agreements signed was one between Shanghai Electric Group of China and Siemens AG for the creation of a service joint venture for the steam and gas turbine power plant market.

China’s official Xinhua news agency said the deal involved $3.5 billion. Siemens disputed the figure, but did not give another one.

Foton Motor of China and Daimler-Benz AG also signed an agreement for a 50-50 joint venture to produce heavy trucks in China for the domestic and foreign markets.

Trucks under Foton’s Auman brand will be produced using Daimler technology in diesel engines and exhaust systems, allowing the vehicles to meet strict European standards, a statement said, without giving financial details. Xinhua put the value of that deal at $938 million.

“As a responsible, long-term investor, China has always upheld the principle of diversified investments,” he said.

“The European market has been, is now, and will in the future be among the main markets for investment of China’s foreign exchange reserves.”

The debt crisis has forced European governments to bail out Greece and set up a €750-billion loan package with the International Monetary Fund to help any other state that may need assistance.

China’s foreign exchange reserves, already the world’s largest, surged to a record $2.454 trillion at the end of June, according to the central bank.

During her trip to China, which comes on the heels of a visit to Russia, she is also due to visit Xian, home to China’s ancient terracotta army.