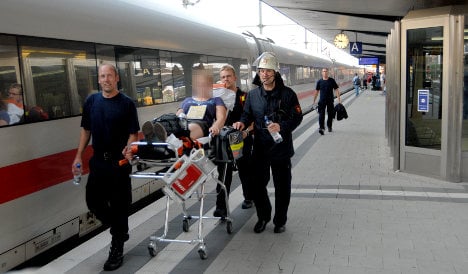 The German Federal Railway Authority (EBA) has written to the rail operator’s management warning that in higher temperatures, the cooling systems could not be guaranteed to work, daily Hannoversche Allgemeine Zeitung reported.

The revelation follows widespread condemnation of Deutsche Bahn over an incident last weekend in which the air conditioning system broke down on an ICE train, sending temperatures soaring to as much as 50 degrees Celsius. Federal police are investigating the incident, which put nine people in hospital, to see whether train staff acted negligently.

The paper quoted the letter to Deutsche Bahn management was written by EBA president Gerald Hörster as saying: “The incident gives sufficient cause for the assumption that it cannot be guaranteed that the risks for the passengers were limited to a responsible and lawful degree.”

The German Weather Service (DWD) forecast on Wednesday that the current heatwave would continue until the weekend after next, with temperatures climbing above 30 degrees in much of the country on most days.

Daily Bild reported meanwhile that rail staff had been sent an internal letter warning that “based on the very high outside temperatures at the moment, we have to expect further air conditioning breakdowns in the coming days.”

Operating instructions sent to rail staff have told them to set the air conditioning to “warm” when the temperature outside tops 32 degrees, to prevent the system overloading and breaking down, the paper reported. That would mean the train interiors settled on about 27 degrees.

Despite initially insisting the heat-shocked train from the weekend was an isolated incident, the rail operator has in the past couple of days had to evacuate two more trains because of cooling failures. Some 40 trains in all have suffered broken air conditioning.