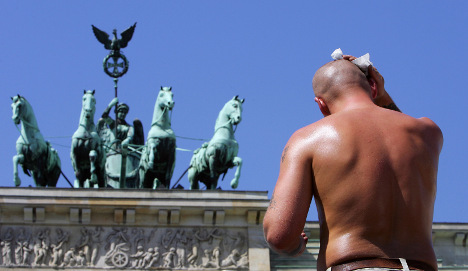 “When we look at the high temperatures that go along with that, it’s easily to conclude that until the beginning of next week sauna-like conditions will prevail in many rooftop apartments,” DWD meteorologist Andreas Friedrich said in a statement on Wednesday.

The DWD said warmer air is expected to blow into Germany from the west while moist air arrived the southwest in the coming days.

“This will arrange all of the ingredients for the second big heat wave of the summer,” Friedrich went on.

On Thursday, highs will range from between 34 and 35 degrees across the country, but the weekend will be even hotter, the DWD forecast.

Some places will see the mercury rise to 37 degrees, but high humidity in the west and southwest could make it feel like a scorching 40 degrees.

Meanwhile the sultry temperatures will create conditions for severe afternoon thunderstorms in mountainous regions with heavy rain, hail and wind.

But a few pockets of the country will remain a bit cooler for those looking to escape the scorching heat. The DWD recommended the island of Helgoland in the North Sea, where highs will range top out at a pleasant 24 degrees.

“Those who want it even cooler should go to the very south of Germany to the highest peak, the Zugspitze,” Friedrich said.

There highs will be between just 11 and 15 degrees for the next several days.