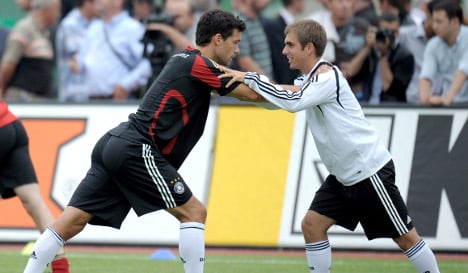 “The captain’s role has brought me a lot of pleasure. It’s a real joy. Why would I want to give it back?” the Bayern Munich full-back told Bild newspaper on Tuesday.

Lahm will earn his 71st cap on Wednesday when he leads Germany out for the World Cup semi-final against Spain in Durban, having taken over as captain when Ballack was forced to miss the World Cup through injury.

“I’d love to keep the armband, I want more responsibilities. But we will see what happens.”

Lahm, at 26, is seven years younger than Ballack, who has won 98 caps but whose international future is in doubt. In the wake of Germany’s powerful defeats of England and Argentina, some commentators argued that Ballack’s absence has actually given the national team a new shot of dynamism.

Lahm said that Ballack ”doesn’t appear to have answered yes or no” to the question of whether he wanted to return as captain.

Meanwhile, midfielder Sami Khedira, who has been suffering from a right thigh injury, was on Monday deemed fit to play in the match against Spain, coach Joachim Löw said.

“Khedira will return to training. All the players are available for the match with the exception of Cacau, who remains doubtful,” said Löw.

Stuttgart midfielder Khedira was substituted in the 77th minute of Saturday’s 4-0 quarter-final win over Argentina and was forced to skip training on Sunday.

Brazilian-born striker Cacau, who picked up a stomach muscle injury last week, has now suffered a back injury.