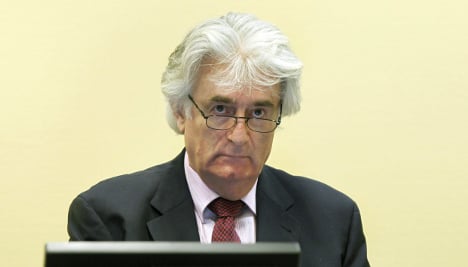 Daily Die Welt reported on Wednesday that Karadzic, facing genocide charges before the International Criminal Tribunal for the former Yugoslavia, wrote to the German embassy in the Netherlands calling on them to “redouble efforts to retrieve these documents.”

But Ambassador Thomas Läufer recently told the court, which sits in The Hague, that Germany did not have the documents Karadzic was seeking.

The former Bosnian Serb leader claims German archives contain records that show NATO supplied weapons to Bosnian Muslims to use against Serbs during the war in Bosnia between 1992 and 1995. This would have been a breach of the weapons embargo enforced at the time by the United Nations.

Karadzic, acting as his own lawyer, claimed before the UN tribunal that Serbs needed to be able to defend themselves against Muslim attacks that were backed by NATO.

Among other things, the documents demonstrated the supply of weapons from Britain and France, which passed through Frankfurt airport, Karadzic said. The tribunal ordered the German government to investigate and hand over any such documents.

In his letter to the German embassy, dated June 28 and made public by the tribunal, Karadzic claimed that former Federal Minister for Post and Communication Christian Schwarz-Schilling had told broadcaster Deutsche Welle that the government “possibly” had at its disposal compromising documents about weapons supplies from France and Britain.

Karadzic stands accused of 11 counts of genocide, war crimes and crimes against humanity – including ordering Serb troops to massacre about 8,000 Muslims in the UN-protected zone of Srebrenica in July 1995.

After 13 years on the run, he was arrested in the Serbian capital Belgrade in July 2008.