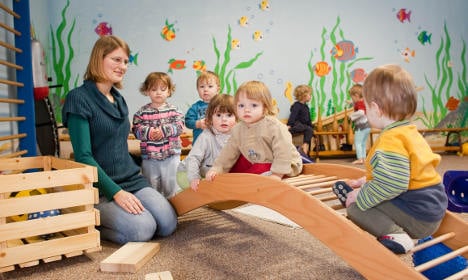 More parents than ever are searching for day care spots for their one and two-year-olds, according to the Bertelsmann Foundation study on early child care and education presented in Gütersloh.

Results showed that on average 20 percent of parents took their one-year-olds to a Kita, as crèches are known in German. The number doubled for two-year-olds to reach 40 percent.

Starting in 2013, the government will guarantee a Kita spot for all children over the age of one, but many states are assuming they will have to provide this for only about 35 percent of children. The study found that the demand will be much greater, though.

Despite the growing demand, Germany’s 16 states showed great differences in early childcare funding. Berlin was the top spender, spending some €4,150 per child under six in 2007, while Hamburg came second with €3,400. The northern state of Schleswig-Holstein spent the least at just €2,000 per year, and Lower Saxony, Bavaria, and Baden-Württemberg were all just ahead of last place.

Much of the money goes to personnel costs, the foundation said.

“Those who skimp on investment in early childhood education and care pay for it in the future,” Bertelsmann Foundation board member Jörg Dräger said.

But the importance of funding such programmes does seem to be taking hold. The study found that on the whole spending in this area has increased by an average of 12 percent between 2005 and 2007.

“The money that a society invests in good early child education serves the individual child as much as our economic development,” Dräger said.