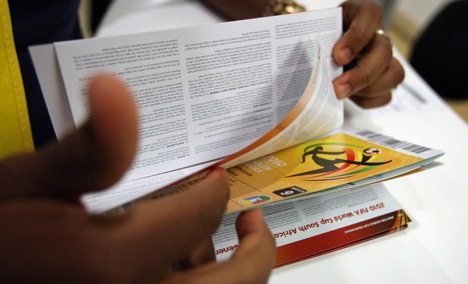 Restaurants and bars in the normally staid Waterfront shopping centre were taken over by followers of the European giants, many of whom had already paid through the nose for accommodation and were willing to do the same for tickets.

“It means the world to us, we want to send them home with their tail between their legs. It’s a game you do not want to miss,” said Stephen Ash, as he nursed a beer alongside a cardboard sign pleading for tickets.

Like many English supporters, Ash was willing to pay many times more than the cover price but was furious at how touts were making a killing. “One guy wanted 5,000 rand ($660) for each ticket. He had a bundle of 40 of them, 350 rand tickets,” said Ash, from Portsmouth on England’s south coast. “It happens every World Cup.”

His fellow England fan Robert Mackie did have a pair of tickets for Sunday afternoon’s game but he feared he would also have to pay a similar price if England beat their old enemy and go further in the tournament.

“After today, that’s it, I’ve got no more tickets for the next game,” said Mackie from the northern fishing town of Grimsby. He said that FIFA’s ticketing system meant that fans from countries which didn’t even qualify for the tournament had access to tickets at the expense of followers of some of the biggest teams.

“I met a guy the other day from Guatamela,” said Mackie who had been to England’s three first round games. “He had 57 ticket he was selling, including six for the final.”

Bloemfontein’s hotels have struggled to sell out during the less glamourous first round matches but are licking their lips at the prospect of an invasion by German and England supporters.

“Bloemfontein is really expensive,” said German supporter Kevin Schueller, from Freiburg. “We are sleeping tonight in a factory with 600 beds and paying 500 rand. Normally we have only had to pay around 100-130 rand a night.”

German fans have had less problems than their English counterparts securing tickets, as many had predicted their team would finish top of their group, unlike England.

They are also relishing the prospect of another classic against an England team whom they beat by penalties in the semi-finals of Italia 90, the last time the two faced off in the World Cup.

“I think it will be a close match. England will get an early goal, then we will get a goal and then penalties,” said Schueller.

The long rivalry between the two sets of supporters has triggered some brutal episodes of hooligan violence. When the teams played each other in the European Championship a decade ago, riot police had to fire water cannon to bring order on the streets of the Belgian town of Charleroi.

Tournament organisers say they have been in close contact with the German and English police and are not expecting any trouble in Bloemfontein. “We had a meeting with police to talk about security around this match. I am sure fans will go there and have a good time,” chief organiser Danny Jordaan told reporters.

Ken Malley, of the England football supporters federation, said the rivalry between the fans had been overhyped, pointing out that they were mixing freely in Bloemfontein. “I do not think you will find any tension,” he said. “They are drinking together quite happily at the moment.”

Stephen Scholz, an official at the German embassy, said there were “no issues at all” between the two sets of supporters.