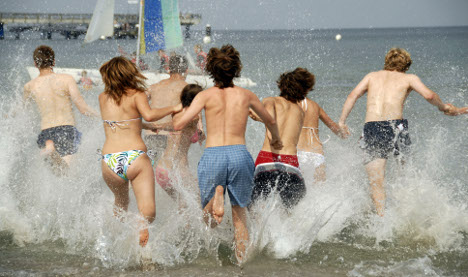 Automobile club ADAC tested the shallow waters – in which children typically play – for contaminants E-coli and Enterococcus, which usually come from the faeces of humans and other warm blooded mammals, at 72 bathing spots at 22 beaches along the North and Baltic Sea coast.

In nearly a quarter of the cases – or 17 bathing spots – the safe level thresholds were exceeded.

“The results of our measurements are alarming, for it is precisely in the paddling and shallow water areas, in which the measurements were taken, that children normally play,” said ADAC vice president for technology, Thomas Burkhardt.

Some areas were particularly bad. For instance, the testers found several times the acceptable concentration of bacteria in the estuary of a creek at Kiekut beach near Eckernförde, on the Baltic. On the North Sea, the pollution was particularly strong around the beach steps of a stretch of beach near Krummhörn-Upleward.

Gastrointestinal illnesses, skin rashes or inflammations could result from this kind of bacterial pollution, ADAC said.

More than half the areas measured by ADAC were deemed acceptable, with 17 achieving a rating of “very good.”