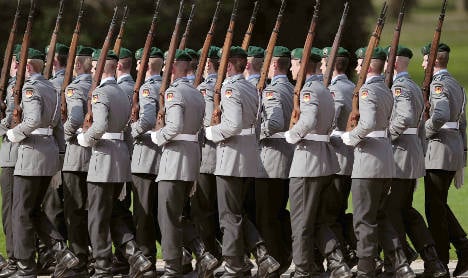 Bundeswehr Chief of Staff Volker Wieker has had plans drawn up that would reduce the armed forces’ personnel from 250,000 to 150,000 to meet the tough savings demands being made by the Finance Ministry, daily Die Welt reported on Tuesday.

However, Wieker is also having alternative plans drawn up that would mean lighter cuts, the paper reported.

All three branches of the military – the army, airforce and navy – as well as support and medical staff would be severely affected by the cutbacks.

There would also be reserve personnel, however.

Defence Minister Karl-Theodor zu Guttenberg has in recent weeks ordered the Bundeswehr’s top commanders to start doing their sums on how and where cuts could be made. Wieker has been asked to present his alternatives for making the cuts by the end of July.

The modelling is based on the expectation that the Finance Ministry needs to cut €4.3 billion from defence spending in the next four years.

Military affairs spokesman for the centre-left Social Democrats accused Guttenberg of conducting “security policy according to the budgetary position.”

The 150,000-staff model was a “radical surgery” that was “not politically justified,” he said.