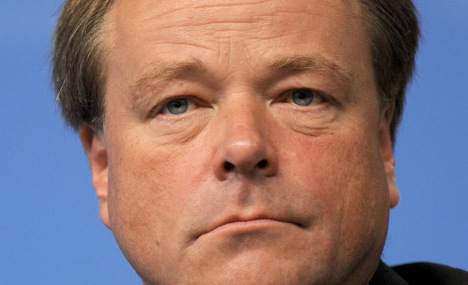 Niebel denied his indignation over being allowed to travel to Gaza had been staged even though Israel contended he knew ahead of time he would be turned back. He said the Israelis had given him permission to visit the Palestinian area under blockade on Thursday, but then the Foreign Ministry suddenly changed course.

The minister had hoped to visit work being carried out in the stricken region with German funds, but despite talks with the Israelis which continued until the last minute, he was not allowed in. Niebel called the incident a “big foreign policy mistake” on Israel’s part over the weekend.

The Free Democratic minister, who is on a Middle East tour, said he considered it “out of the question” to allow the incident to escalate tensions between Germany and Israel.

The Israeli government justified its decision by explaining that letting high-ranking politicians into the Gaza Strip would only legitimise the radical Hamas government.

But Niebel went on to reiterate that no visits with Hamas had been scheduled.

“It would have supported the legitimate Fayyad government if the trip had been allowed,” he said.

He said the blockade, which is aimed at preventing Hamas members in the Gaza Strip from obtaining weapons and materials to build rockets which are fired over the border into Israel, was not a sign of strength.

Rather, he said, it was, “proof of unspoken fear.” He also urged the Israeli government not to let the clock run out on the remaining opportunity for peace talks.

On Monday, Niebel said the Israeli decision to ease the blockade and allow most goods into the region was “a step in the right direction.”

The Islamist group Hamas came into power in Gaza in 2007, after which Israel imposed a blockade on the small coastal region.

Global attention to the situation there was recently sparked by an Israeli attack on an aid convoy aiming to break the blockade and take supplies to Gaza at the end of May. The incident resulted in nine deaths among those on board and garnered global condemnation that included Germany’s disapproval.