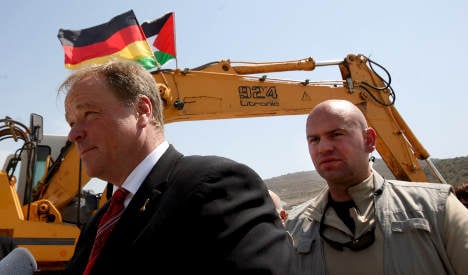 Niebel visits a German-funded project in the West Bank on Saturday. Photo: DPA

During his current Middle East trip he had intended to visit work carried out in the stricken region with German funds, but despite talks with the Israelis which continued until the last minute, he was not allowed in.

“I had hoped that this could have been a clear political signal for an opening and for transparency,” he told the current affairs programme heute on ZDF television station.

“Sometimes the Israeli government does not make it easy for its friends to explain why it behaves in the way it does.”

Plainly furious, he also gave an interview to his local paper.

“The refusal of entry for the German Development Minister into the Gaza Strip is a big foreign policy mistake of the Israeli government,” said Niebel, according to Monday’s edition of the Leipziger Volkszeitung.

He had intended to visit the Hamas-ruled area on Sunday in order to inspect a sewerage works that has been financed by German aid funds.

He said the blockade, which is aimed at preventing Hamas members in the Gaza Strip from obtaining weapons and materials to build rockets which are fired over the border into Israel, was not a sign of strength.

Rather, he said, it was, “proof of unspoken fear.” He also urged the Israeli government not to let the clock run out on the remaining opportunity for peace talks.

“It is five to twelve for Israel,” he said.

Hamas took power in Gaza in 2007, after which Israel imposed a blockade on the small coastal region. An attack by Israeli commandos on an aid convoy aiming to break the blockade and take supplies to Gaza at the end of May resulted in nine deaths among those on board and global condemnation of the Israelis’ actions.

A group of German Jews are preparing at least one more aid trip which they intend to sail to Gaza.