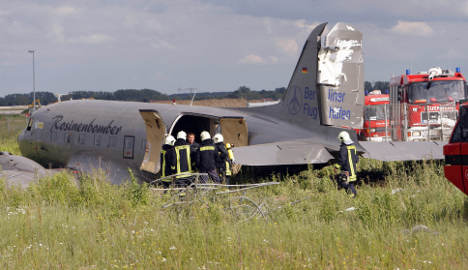 The DC2 plane was one of the original Rosinenbomber or “Candy Bombers,” so called due to the sweets the aircrews would throw out of the windows for children during the 1948-49 airlift operation.

It is now used by Air Service Berlin, providing tourist tours above the city. A statement from the airport authorities said it “had to make an emergency landing after take-off for unknown reasons.”

It landed in a field near Berlin’s Schönefeld Airport carrying 25 passengers and three crew members. Those who were injured are not said to be seriously hurt.

Schönefeld was closed for 15 minutes after the incident, an investigation into which was started immediately.

The Berlin Airlift was the operation by Allied forces to supply West Berlin with food and supplies after the Soviets cut off all other routes into the area in an argument over jurisdiction and currency reform.

More than two million tonnes of food, coal and petrol were flown into Tempelhof airport by Allied air crews before the Soviets lifted the blockade.