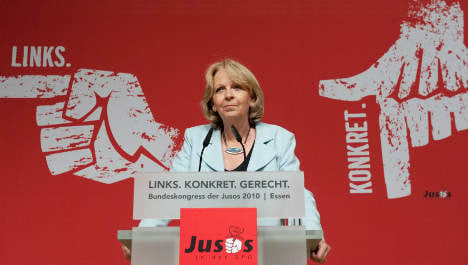 The chances of such a government increased on Saturday when caretaker premier Jürgen Rüttgers told his Christian Democratic Union party meeting he would not stand against state SPD head Hannelore Kraft for election to premier.

The state SPD called its governing council to a meeting in Dortmund on Saturday, while the Greens met in Neuss for a state party conference, after Kraft surprised many by declaring on Thursday she was ready to form a minority red-green government.

She will put herself forward for election by the state parliament to be premier in the middle of July – by which time the two parties should have completed their coalition negotiations which should start on Tuesday.

Rüttgers has said he was ready to reliquish leadership of the CDU parliamentary group, according to regional newspaper the Rheinische Post, but intended to retain chairmanship of the state party, effectively taking a step back from front-line politics.

Kraft said on Friday at a youth SPD (Juso) meeting, that ruling in a minority government would not be easy, and that many compromises would have to be made. “We would get many laws through, but with many of our aims, it would be difficult,” she said.

The first planned law would be the abolition of university tuition fees, which she said she could hardly imagine not being supported by the socialist Left party – and would thus be passed.

The national SPD has also commented on the situation, with party chairman Sigmar Gabriel appealing to the state CDU and Free Democrats to take responsibility for progress in the state in the event of a minority government – rather than simply blocking as much as they could.