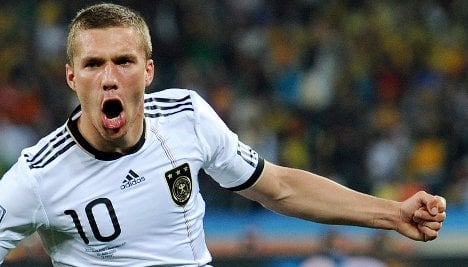 A stylish 4-0 demolition of Australia in their opener has left Joachim Löw’s men sitting pretty atop Group D and all but assured of a passage through to the knockout stages.

Mathematically it is still possible they could still be squeezed out but that would require a combination of improbable upsets and fierce comeback by Australia.

Goals from Lukas Podolski, Miroslav Klose, Thomas Müller and Cacau got Germany’s 2010 campaign off to the perfect start in Durban last Sunday. While other World Cup title contenders like Brazil, England, France and Italy have struggled to varying degrees in their first games Germany were cool, confident and clinical.

The three-time champions arrived in South Africa rocked by the absence of Michael Ballack, but a new star was born in Durban with unheralded Mesut Özil’s impressive performance in midfield.

“We have always sought an out-and-out Number Ten and now we have found one,” said striker Klose. “Mesut has made the position his own for Germany. He is an absolute bonus for us.”

Captain Philip Lahm said it had been important to start with a win, but insisted: “There’s still a long way to go.”

Müller, who produced a superb strike for Germany’s third goal against Australia, cautioned that all the euphoria generated by the win would evaporate with a poor result on Friday.

“The international press are heaping praise on us, when you play well you are everyone’s darling, but if we lose 2-0 to Serbia, they will tear us apart, so we need to keep our feet on the ground,” said the 20-year-old.

“All we have done is get off to a good start, we haven’t really won anything yet and certainly not qualified for the next phase,” the rising Bayern Munich star added.

“We are not the fantastic team which everyone makes us out to be. But we have every reason to look forward to the Serbia game with quiet confidence, it will be a different type of game as they desperately need a win.”

Löw, whose contract runs out after the World Cup, is aiming to all but seal their second round ticket at the Nelson Mandela Bay stadium.

“We did lots of things well, but it was only the beginning,” he said. “The win was important for us as it will give us confidence. We now have the opportunity to reach the Round of 16 early … that’s what we’re aiming for.”

The Serbs, who had centre-back Aleksandar Lukovic sent off in their 1-0 loss to Ghana, are in a must-win situation if they are to give themselves a chance of prolonging their stay in South Africa beyond the first round.

“It’ll be tough against Germany who have a lot of quality but we have to win,” said Serbia captain Dejan Stankovic. “We’ll need to take more risks and concentrate harder.”

“We need to forget about Ghana and go for it in the remaining two matches,” Zigic said. “Germany were excellent against Australia but they had an one-man advantage for the entirety of the second half. It’s all up to us right now and we have to believe we can qualify for the second round.”

Serbia will present a stiffer test than Australia but with Mesut Özil pulling the strings in midfield for their in-form attack Germany’s big danger could be over confidence creeping in in the belief that they’ve already done enough to reach the second round.