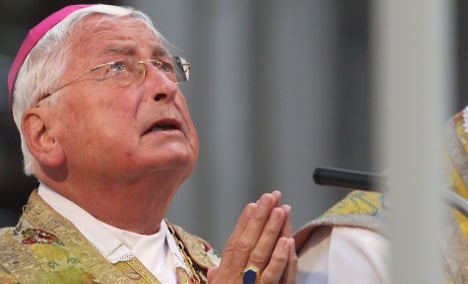 Taking his case to Rome is a “very good idea which I am considering and weighing very well,” the 69-year-old told daily Die Welt.

Should he do so, he would appeal to Church laws which make certain actions invalid if they occurred due to outside pressure, something Mixa said he suffered. The pressure to resign was “like purgatory,” he told the paper.

Mixa accused the head of Bavaria’s Catholic bishops, Archbishop Reinhard Marx, as well as the country’s top Archbishop Robert Zollitsch of rushing to the Pope with a “so-called abuse case based on what amounts to no more than eight handwritten sentences on a highly dubious scribbled note.”

Instead the two should have been “more brotherly,” Mixa said.

Despite his resignation in April following accusations that he beat children at a Catholic orphanage in the 1970s and 1980s and later misused Church money, Mixa made headlines again this week by returning to his quarters at the bishop’s palace in Augsburg because apparently had nowhere else to stay.

The move is reportedly causing a stir among Church officials, who view it as an act of defiance, a high-ranking diocese figure told local paper Augsburger Zeitung on Monday. As a retired bishop he no longer has the right to occupy his old apartment and must first apply for permission from the diocese administrator. It remains unclear whether he has done this, the paper said.

“He invited me for a conversation,” he said. “Above all I want to discuss how the situation should further develop.”

Mixa also said he plans to continue working as a priest.

Meanwhile the lay group Wir sind Kirche said that while the wish was understandable, it was unthinkable in Mixa’s former diocese. Spokesperson Christian Weisner told news agency DPA that Mixa should not to become a liability for the entire German Church.

His behaviour gives the impression that the former bishop is taking bad advice, he said, adding that he should remember that his diocese is more important than his personal ambitions.