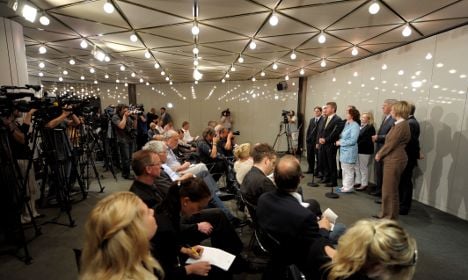 Despite optimism earlier in the week, the three parties – whose colours are red, green and yellow respectively – could not agree on educational policy.

The pro-business Free Democrats (FDP) were not willing to sign on for a new school system that would put all students on a single track, party leader Andreas Pinkwart told journalists after the meeting, adding that talks had still been “constructive.”

Another sticking point was reportedly nuclear energy policy. While the FDP favours extending the lifetime of Germany’s nuclear power plants, the centre-left Social Democrats (SPD) and the environmentalist Greens are strictly against it.

SPD leader Hannelore Kraft said she regretted the breakdown of the parties’ second round of talks, because her party and the Greens had showed a willingness to compromise. Kraft said she plans to speak with her party on Friday afternoon to decide on their next step.

Head of the environmentalist Greens’ state parliamentary group Sylvia Löhrmann accused the FDP of being reluctant to negotiate.

One solution to the stand-off could include a “grand coalition” between the conservative Christian Democrats (CDU) and the SPD, but talks between the two sides ended last week without an agreement last week. The SPD and Greens could also try to form a minority government supported by the socialists from The Left part, or voters could be forced to go to the polls again.