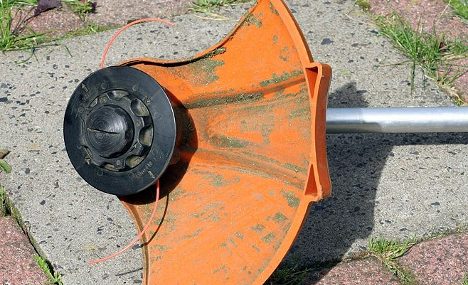 Not the actual weapon or crime scene. Photo: Wikipedia Commons

The pair had been bickering over a small strip of lawn near their homes in the small community of Grasellenbach just south of Darmstadt, according to the authorities.

When one man decided to trim his grass with a weed whacker on Wednesday afternoon, his neighbour was apparently disturbed by the noise.

This prompted the 66-year-old to pour a bucket of water over his 63-year-old nemesis, the police said.

“Unwilling to tolerate this outrage, the drenched man took to drastic measures,” the statement said. “Armed with his strimmer the 63-year-old attacked the other

Grasellenbach resident and caused multiple injuries below the waist – some of which were severe.”

The wife of the victim managed to break up the fight until police arrived and arrested the weed-whacker-wielding neighbour.

The injured man was transported via helicopter to a Ludwigshafen hospital with multiple flesh wounds and severe damage to his knees, the police report said.

His neighbour is now under investigation for attempted homicide.