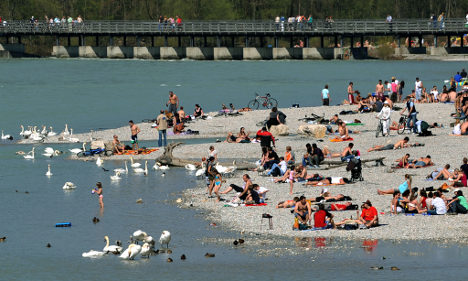 A file image of people recreating along the Isar River in Munich. Photo: DPA

The young boy survived, but rescuers were unable to revive his father.

According to a fire department statement, the toddler was playing on a bridge on Sunday when, for reasons unknown, he fell into the river below and was swept away by the current.

His father leapt into the water after him. Meanwhile, lifeguards were alerted, one of whom managed to get hold of the young boy. Though he suffered hypothermia and was taken to a Munich hospital, the toddler was expected to recover, the statement said.

The father appears to have been dragged under by the current. After a search involving the fire department, lifeguards, police cars and two helicopters, the man’s body was found washed up on a sandbank.

A fire department officer managed to get to the sandbank and attempted to resuscitate the man, but he had serious head injuries and died at the scene.

The man’s wife, who is eight months pregnant, was treated for severe shock.