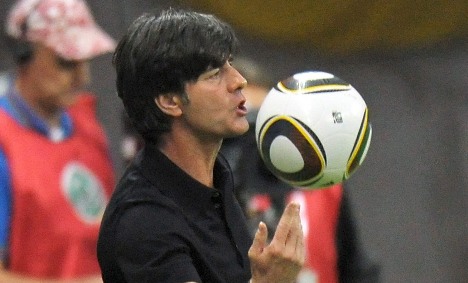 New captain Philipp Lahm hit the equaliser and his deputy Bastian Schweinsteiger scored two penalties as Germany had to come from behind against a side that only just missed out on the finals themselves, losing to Portugal in a play-off.

Löw has endured a difficult few weeks which have seen him lose captain Michael Ballack, midfielder Christian Träsch and defender Heiko Westermann, all through injuries.

But the national coach said he is happy with his squad as youngsters Mesut Özil and Marko Marin both impressed in a good team performance.

“We went up a gear in the second-half,” admitted Löw, whose side faces Australia, Serbia and Ghana in Group D in the Republic and are bidding to win their fourth World Cup title.

“It was great how the team increased the pace, we have great potential and have all worked very hard, but we also have a great deal of hard work ahead of us.

“We have a good team, we are in a good mood and we know we can play well in this tournament. I have complete confidence.”

Having beaten both Malta and Hungary 3-0 last month in warm-up games, Germany responded to Edin Dzeko’s early goal with an impressive performance, but the captain said their is still room for improvement.

“I am unhappy we didn’t keep a clean sheet,” said Lahm.

“We struggled to create goals in the first-half, but luckily we worked things out.

“I look forward to the World Cup, we are in a good mood, have trained well and are fit.”

With Ballack out of the World Cup, Lahm will wear the captain’s armband in South Africa when Germany open their campaign against Australia on June 13.

He was at fault when Bosnia took the lead after he tried to clear the ball from a Dzeko attack, but could only watch in horror as the ball hit the Wolfsburg striker on the chest and looped over Manuel Neuer in the German goal.

Having fallen behind to the 15th-minute goal, Germany laid siege to the visitors goal with Özil going close with a couple of clear chances while Podolski rattled the cross-bar with a fierce shot.

But the hosts finally had their patience rewarded when Lahm went on a weaving run at the Bosnian goal and buried his shot past goalkeeper Kenan Hasagic on 51 minutes for the equaliser.

With 20 minutes left, Werder Bremen’s Marko Marin came off the bench against the country of his birthplace and was straight into the attack, winning a penalty just two minutes after his introduction.

He was brought down by Sanel Jahic and Schweinsteiger netted the penalty on 72 minutes.

”Schweini” stepped up again to net the second penalty when second-half substitute Thomas Müller was brought down in the penalty area on 76 minutes by Bosnia captain Emir Spahic.

The performance bodes well for the opening game in Durban with Lahm targetting a semi-final place for Die Mannschaft.