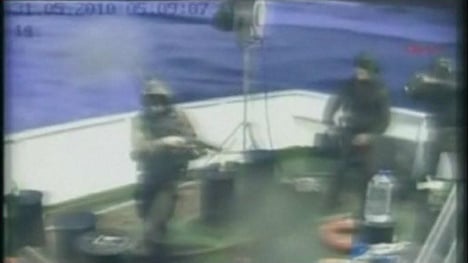 “I spoke… on the phone with Israeli Prime Minister (Benjamin) Netanyahu, as well as with Turkish Prime Minister (Recep Tayyip) Erdogan, and I made clear my deep concern,” Merkel told reporters in Berlin.

Merkel added that she had indicated to the two leaders that “we must do everything in our power, in this difficult situation, to make sure there is no escalation.”

Expressing “shock” at the loss of life, Merkel called for a comprehensive “clearing-up” of the situation surrounding the deadly raid and added that international observers could help to accelerate this.

She also called for “information as soon as possible” about the fate of six German citizens, including two members of parliament who were on board the convoy.

The Germans were on board ships bringing aid to the Gaza Strip when it was attacked by Israeli forces early on Monday morning, leaving an estimated 19 people dead and injuring others.

Annette Groth and Inge Höger, both parliamentarians for the socialist Left party, and Norman Paech, a former MP for The Left, were among those participating in the aid mission, the party said. There has been no contact with the German MPs since.

According to Israel’s private channel 10 television, the country’s marine commandos opened fire after being attacked with axes and knives by a number of the passengers on board the aid ships, though the station did not cite a source for the information.

News broadcaster Al Jazeera reported that some 19 people were believed killed in the attack.

The bloody end to the mission to deliver supplies to Gaza came on the eve of a meeting in Washington between US President Barack Obama and Israeli Prime Minister Benjamin Netanyahu.

According to Al Jazeera, the flotilla was some 65 kilometres from the Gaza coast in international waters when the altercation took place.

The Free Gaza Movement, which organised the aid mission, said in a statement that Israeli commandos dropped onto a Turkish passenger ship called the Mavi Marmara, shooting immediately into a crowd of sleeping civilians. The organisation said it had no other news regarding the flotilla’s other five boats.

“Without being able to judge the details of what happened, it is never justifiable and therefore criminal to open fire from one side killing or injuring peaceful people,” Gysi said according to news magazine Focus.

Earlier Monday, Merkel’s spokesman had said that Israel’s actions appeared at first glance to have been disproportionate.

“Every German government has always recognised and supported the right of Israel to defend itself, but this right must of course be within the boundaries of proportionality,” the spokesman, Ulrich Wilhelm, told reporters.

“This basic tenet is a key part of international law … At first glance it does not look like this basic rule was adhered to,” he told a regular briefing.