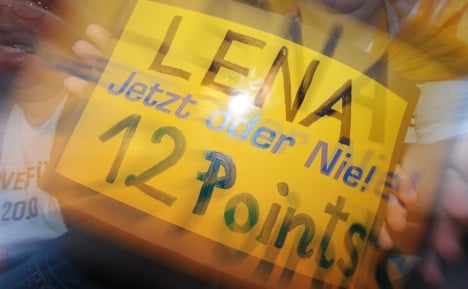 As soon as Lena was declared the winner, shouts of joy burst out from the crowds of thousands watching the event from giant screens displayed in the northern city of Hamburg and in Hannover, her home town in central Germany.

“Lena, you are making a dream come true,” ran the headline in the online version of the Bild newspaper, which praised Germany’s “sensational” victory.

It was only Germany’s second winner in the 54-year-old competition, and Lena’s song was the clear winner, finishing with 246 points. Second-placed Turkey reached 170.

Over the last weeks, Germany had fallen for the natural-looking, spontaneous, and previously unknown young singer. She won audiences’ hearts by candidly answering questions on her private life and criticism of her English accent.

Eurovision organisers said her “Satellite” song had become one of Germany’s top downloads. “Love, Oh, Love/I gotta tell you how I feel about you/Cause I, Oh, I/Can’t go a minute without your love,” says its jerky chorus, in English like most of the songs in this year’s contest.

“All of Germany was trembling… and crossing its fingers: Lena Meyer-Landrut was carrying the hopes of a nation on her shoulders,” said the news weekly Focus.

Chancellor Angela Merkel on Sunday also congratulated the unpretentious teen on her “super success” in Oslo.

“Lena strongly impressed me with her naturalness and warmth,” Merkel said. “She is a wonderful example of young Germany.”