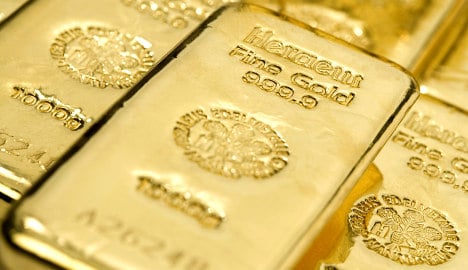 Let no one tell you that the German economy is stagnating. Across the country, shops have been opening up, offering to buy and sell gold. Some have bodyguards treading the pavement outside, some only open their doors if you ring a bell like a brothel, and all have heavy iron or steel window shutters that come clanking down at night.

Germans seem to have a great deal of metal in their mouths because the shops, new or newly painted, are plastered with signs announcing: Best prices paid for Jewellery, Coins and Zahngold – that is, gold fillings. How does that work with Zahngold?

Presumably people are not striding in and ripping out their preciously filled molars in order to raise the cash to pay the rent. I enquired in a shop in Berlin. A very pleasant Lebanese trader told me that customers are coming in with their own Zahngold – kept after they had their fillings exchanged at the dentist – in little bags, he weighs the gold on a delicate scale and makes an offer. As simple as that.

He made it sound as if he was selling clementines. Some of the gold fillings have been inherited from parents, handed to the children by the crematorium management. And because the selling of teeth seems to be such an intimate process, almost a betrayal of one’s own body, the customers tell stories about their lives, their financial desperation, to minimise their guilt. Zahngold is a last resort.

The current price of gold makes it tempting though. Since the financial crisis prices have been rising steadily, but the decisive moment almost certainly this month when €750 billion was thrown into a pot to protect the value of the euro. The move might have briefly subdued the markets, but it panicked my German neighbours. It was a clear signal that their euro savings might be about to melt. The pound and the dollar don’t look much healthier. A good time to buy gold. Or sell it. Gold is a hedge against inflation, but also a strong performer in times of deflation. Whatever happens next, gold is interesting. In May, it has been selling for more than $1,200 an ounce – a 35 percent rise since the start of the financial crisis in August 2007.

So that explains why places buying Zahngold have become a fixed part of Germany’s urban landscape, sandwiched between the internet cafe and the solarium. The more the governments do to avert crisis, the more crisis-alert the population becomes. And in Germany that means the 1920s atavism, returning to the sense that all money is vulnerable.

A new place has opened up in a posh bit of western Berlin, buying and selling paintings and porcelain as well as gold coins. Not at all a gold-filling establishment. The owner told me that trade is booming – with customers who are buying gold, and people who are selling in order to raise the cash to buy property. The last time it peaked, he explained, was in 1980 after the Soviet invasion of Afghanistan. It surged from $400 to $850 in five short weeks. A year later it was down to $300. It took about 20 years for prices to recover.

Germans have become the world’s biggest gold-hoarders ahead of the Americans and the Swiss. Gold has to be more than a measure of lack of confidence in the global economy. There must be a stronger attraction.

My own fascination with the metal began as a schoolboy when I slipped into my local cinema – through the fire exit since I was too young for an adult movie – to watch the James Bond film “Goldfinger.” The evil villain Goldfinger planned to explode an atomic bomb in Fort Knox, destroy the US gold reserves, thus making his own bullion reserves ten times more valuable. In real life he would have made much more just by keeping his gold in the safe. No matter, he got to paint a live naked woman in real gold paint and that was what most interested me in 1964.

There is something fetishist about gold, perhaps that is what makes me feel a bit queasy when I pass Zahngold shops. Many years ago a crazy Italian artist called Piero Manzoni created 90 small tin cans, sealed with the text Merda d’Artista – artist’s shit. Supposedly that was what was inside the cans–an immaculately shaped, carefully weighed specimen of his excrement. Each 30 gramme container was priced by weight, based on the current value of gold, which was around $1.12 in 1960.

It was impossible to open the cans since exposing the artist’s shit to the air would have destroyed the art work and made it worthless. Over the years Manzoni’s crap has increased in value even faster than gold – one shit-can fetched $80,000 at a recent auction – and more than 40 years after his death he is still regarded as one of the great jokers of the art world. His point: the price of gold bears as much connection to reality as the price of human excrement. It glitters, it catches the light, but it is largely an act of imagination.

Even so, the Berlin city government could do worse than adopt Manzoni’s idea as a solution for the German capital’s horrendous dog poo problem. Merda di cani fixed at the price of gold? It could become the city’s greatest natural resource.