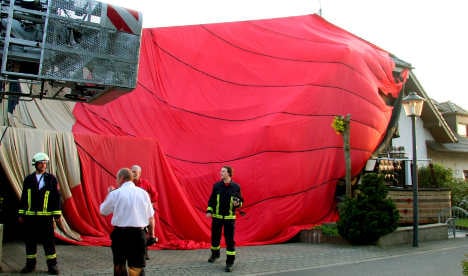 The 49-year-old pilot and his three passengers, two men aged 50 and one man aged 22, were all found dead at the scene near Mönchgrün near the A9 in Thuringia.

“The helicopter is completely destroyed and lying at the edge of a field near a woodland,” a spokeswoman for the Saalfeld police.

The four bodies were recovered from the crash site on Sunday evening and will be examined. An investigation will be conducted into the crash to try to determine why the Fairchild-Hiller FH 1100 helicopter crashed.

The balloon’s pilot had been trying to land in a field, but was caught in the wind and crashed into the front garden of a house in Hennef.

All those in the balloon, as well as the house owner, were shocked, but no-one was injured, although some damage was done to the roof of the house upon which the balloon was caught.