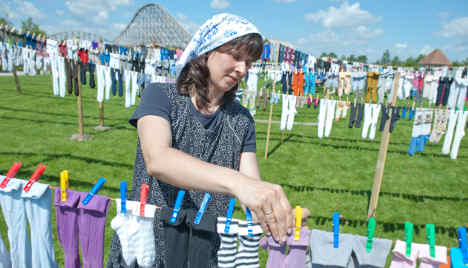 “It starts at the entrance and goes past the attractions and all the way along the walkways,” said a proud spokeswoman at the Tripsdrill Amusement Park near Heilbronn, Baden-Württemberg.

The washing line, with socks pegged on all the way along, runs for 2,324.08 metres which should easily beat the official record of 2,013.75 metres.

Visitors to the park have been asked to bring socks to contribute – or give up the ones they were wearing – with more than 10,000 pairs having been donated.

“Most are in good condition, but there are also some with holes. It’s very colourful here,” said the spokeswoman.

The exact number of socks will be counted on Monday while the park’s managers hope for official confirmation of the record from a representative of the Guinness Book of Records.

The spokeswoman did not say why they decided on the socks-on-line record.