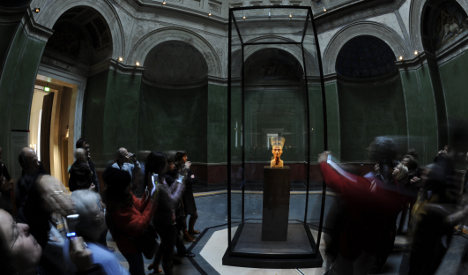 Object of desire - Nefertiti in the Neues Museum in Berlin. Photo: DPA

Egyptian calls for the bust to be returned have increased recently, while it has been re-housed in Berlin’s Neues Museum, forming the centrepiece of the Egyptian collection in the German capital.

Westerwelle concentrated on the argument that the bust, said to be more than 3,000 years old, could be damaged if moved. It is “in the interest of human cultural heritage” that it not be put at risk, he said during a visit to Cairo on Saturday.

Zahi Hawass, Egyptian head of antiquities, has repeatedly warned that he intends to submit an official bid for the statue to be returned. This was not mentioned by Egyptian foreign minister Ahmed Abdul Gheit during the meeting with Westerwelle.

“We will reach a settlement which is satisfactory for both sides,” said Gheit.

The German argument is that the bust was fairly obtained by the German Orient Association, which was splitting up a collection of finds with Egyptian authorities.

It was among a number of artefacts excavated by archaeologist Ludwig Borchardt in 1912 – the artefacts were split into two groups and the Egyptians offered the choice of which ones to keep.

Hawass and many Egyptians say his predecessors, who chose the collection of artefacts which did not include the Nefertiti bust, were conned by the Germans.

Even Gheit could not hide his frustration at the situation where he said the greater part of Egyptian history is reflected in objects which are in European or American museums.

“There is also the desire in Egypt among my countrymen to learn about their history first hand,” he said.

Westerwelle is due to meet Egyptian president Hosni Mubarak on Sunday for talks about the chances of reviving the Middle East peace process. Westerwelle is then scheduled to visit Jordan and Syria to discuss the same matter with leaders there.