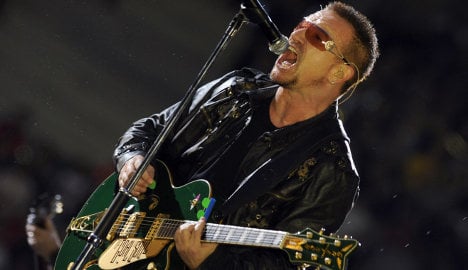 The band was due to start the third leg of the 360-Degree Tour in Salt Lake City on June 3, and was expected to start rehearsals there this week. More than 400 crew members are expected in town to set things up but some have been told to stay at home.

The exact nature of Bono’s injuries have not been released, nor how he was hurt, or what he was doing in Munich, apart from the band’s statement that he was rehearsing for the US leg of the tour.

“It’s unfortunate that we are inconveniencing fans; we will make plans to reinstate these dates as soon as possible,” said Paul McGuinness, the band’s spokesman on its website.

Bono is being treated by neurosurgeon Jörg Tonn and sports therapist Hans-Wilhelm Müller Wohlfahrt, who also treats the German national football team, according to the band’s website.

It is not sure when he will be able to take to the stage again, but he is expected to have to remain in Munich for a few days before returning home to Ireland to recover.