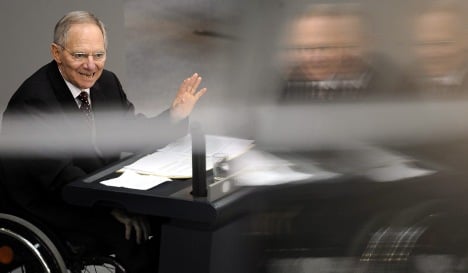 Possibly prompted by international speculation that he may not stay in his job much longer, Schäuble told the Frankfurter Allgemeine Sonntagszeitung weekly paper, “I thought about my responsibilities, of course.

“The country is in such difficult times that it can only deal with its finance minister missing important appointments for a limited time.”

The Economist wrote last week that the fact that he was forced to leave the euro crisis meetings in Brussels sparked, “speculation that he might not long remain in office.”

But after his hospital stay, he said he was now satisfied with his state of health. Schäuble was admitted for treatment two weeks ago while in Brussels, after he suffered an adverse reaction to a medication. He was then transferred to a German hospital where he stayed for a few days.

Schäuble was paralysed and confined to a wheelchair in 1990 when a man suffering paranoid hallucinogenic schizophrenia shot him during a political event.

He has since suffered several bouts of ill-health connected to his paralysis, but has largely remained a very active politician, serving in the federal government as interior minister as well as his current post.

He said the discussion over his health was legitimate, and that he had himself questioned whether someone in his condition could take on such demanding jobs. But he said he had shown that this was indeed the case.

Schäuble, who is 67, said he had had a busy week and was tired because of that, because he had not slept much. “But otherwise, I feel fit,” he told the paper.

He said the support from Chancellor Angela Merkel during his latest hospital stay had been very touching. “I found it a moving gesture that Ms Merkel said I should not put myself under pressure,” he said.