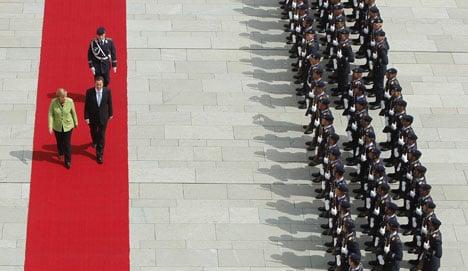 The Conservative premier said he backed a “strong and stable” eurozone, although Britain is not a member, but stressed his centre-right government had agreed it would never cede any new powers to the European Union.

“There is no question of agreeing to a treaty that transfers power from Westminster to Brussels. That is set out 100 percent clearly in the coalition agreement,” he said, referring to his governing deal with the Liberal Democrats.

“It goes without saying that any treaty, even one that just applied to the euro area, needs unanimous agreement of all 27 EU states including the UK, which of course has a veto.”

Merkel acknowledged that changes to the Lisbon Treaty governing the EU that saw a transfer of powers to Brussels were for now out of the question due to British opposition, but said the financial reform process was just starting.

“There are ideas from Germany where treaty changes would play a role, but we say very clearly that we are just beginning this work,” Merkel said.

“There is no consensus at all in the euro group, either, about what exactly should be done.”

They also openly clashed on issues such as new curbs on the trillion-dollar hedge fund industry, which the EU said this week it would seek after strong German lobbying.

Cameron, whose Conservative party has strong ties to the City of London and the financial sector, said Britain would maintain its opposition.

“We do have our concerns because we don’t think that hedge funds were the cause of the problems in our financial markets and in our economies,” he said.

Cameron declined to criticise Germany’s surprise decision this week to unilaterally ban “naked short selling,” the sale of bonds or shares by market players who neither hold the security nor have borrowed it to make their trade. But he said Europe must tackle the “real causes rather than just the symptoms” of the current crisis, including excessive debt, excessive deficits and failings of the banking and financial systems.

“Each country must have its own financial regulation in its own way,” he added.

Despite speculation in the British press that the meeting would be “frosty,” Cameron and Merkel were at pains to stress their willingness to cooperate as markets are rocked by fears over high EU public debt levels.

After a visit to Paris on Thursday, his first foreign trip since taking office last week, the 43-year-old Cameron received a warm welcome with military honours from Merkel at her ultra-modern chancellery in Berlin.

The British premier later told reporters he was confident he would form a “strong and positive partnership based on results” with the 55-year-old Merkel.

Cameron was seen as keen to dispel his eurosceptic reputation amid criticism Britain is sitting by while fellow EU members put together a trillion-dollar emergency rescue package to protect their debt-stricken partners.

The visits to the countries that have historically been the twin engines of European integration come at a critical time, with the raging debt crisis threatening to upset global financial stability.

The German parliament voted Friday to approve the country’s share of the 750-billion-euro (938-billion-dollar) “shock and awe” emergency package of loan guarantees. Berlin is to provide up to around 150 billion euros.

Meanwhile a European economic task force was holding its first meeting in Brussels to beef up economic and budgetary surveillance in EU member states.

Merkel and Sarkozy had hoped to win Cameron’s support for stricter EU budget controls and market regulations, and for global financial reform at a summit of the Group of 20 major economies next month.

Given the importance of the City of London to global finance, market observers say new rules without British support would be a paper tiger.

Beyond the financial crisis, Merkel and Cameron touched on efforts to stabilise Afghanistan and impose sanctions against Iran over its disputed nuclear programme.