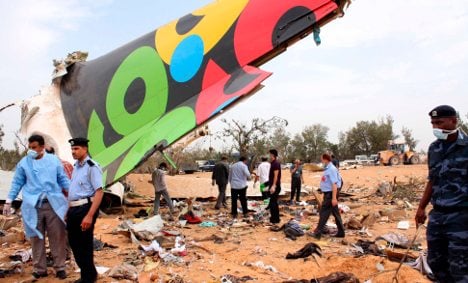 The Airbus A330-200 operated by Afriqiyah Airways crashed while attempting to land at Tripoli airport early Wednesday morning after flying from Johannesburg, South Africa.

The sole survivor is a young Dutch boy who has multiple fractures to his legs but is in a stable condition. The other 92 passengers and 11 crew were killed in the crash, whose cause remains a mystery, though Libyan Transport Minister Mohamed Zidan ruled out terrorism.

In a statement posted late Wednesday evening on its website, Afriqiyah Airways said that Libyan authorities had confirmed that one German was among the dead, with 19 victims still to be identified.

The statement said 58 Dutch passengers, six South Africans, two Britons, two Libyans, two Austrians, one French national and one Zimbabwean were also among the passengers who died. All 11 crew were Libyan.

Germany’s Foreign Ministry had stated Wednesday afternoon that no Germans were on board.

According to Britain’s Guardian newspaper, a spokeswoman for Airports Company South Africa, Nicky Knapp, said 42 passengers had been due connect to Düsseldorf airport in Germany.

Afriqiyah Airways said in a statement: “We are very sorry to announce the tragic loss of Afriqiyah Airways flight 8U771 from Johannesburg in an accident during landing at Tripoli international airport. We extend our deepest sympathy to the families and friends of the victims.”

The plane’s flight recorder has been recovered. Weather conditions were reportedly good when the plan attempted to land.