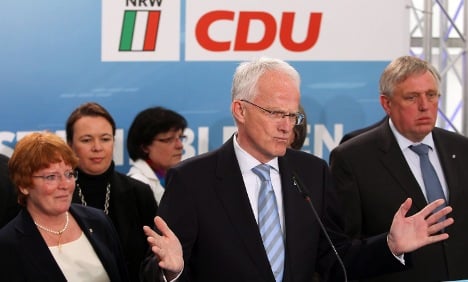 The poll disaster at both the state and federal level robs Merkel of political room to manoeuvre at a moment in which the 16-nation eurozone, and Germany as its top economy, are facing a historic crisis.

NRW, with its 13.5 million voters, is ruled by the same centre-right coalition Merkel has in Berlin, making the poll a damaging referendum on her government in its first electoral test since she won re-election in September.

Merkel’s Christian Democrats (CDU) drew just 34.6 percent – their worst result ever in NRW – with allies the Free Democrats (FDP) at 6.7 percent, as the final results robbed them of their majority in the state legislature.

The opposition centre-left Social Democrats (SPD) scored 34.5 percent, failing to profit from the conservatives’ misery, with the environmentalist Greens at a strong 12.1 percent and the socialist Left party on 5.6 percent.

With no clear winner, the results mean that the two strongest parties will scramble to cobble together a ruling alliance, or perhaps link up to form a “grand coalition.”

But the impact for national politics was clearly disastrous, with Merkel’s alliance sacrificing its majority in the Bundesrat upper house. This will hobble the government in pushing through its tax and health care reform agenda.

Conservative NRW premier Jürgen Rüttgers blamed headwinds from Berlin, where the governing coalition has been marred by squabbling since it took power in October, for his “bitter” defeat.

“It had to do with the government in Berlin’s start but also the difficult situation in Greece,” he said.

FDP leader Guido Westerwelle, who is also Merkel’s vice-chancellor and Foreign Minister, called the poll result a “warning shot” from voters that would have clear national consequences.

“Citizens need to know that we have heard their message. We must redouble our efforts to win back their lost confidence in our work,” he said.

News weekly Der Spiegel said that it was a clear sign that “Merkel does not have her coalition under control.”

Daily Bild said in its Monday issue that NRW marked a “political landslide”, in which voters gave Merkel’s government a “lesson they will not forget during this term” running to 2013.

The centre-left daily Tagesspiegel said Merkel had dithered as the eurozone struggles to regain stability in the wake of the Greek debt catastrophe.

“The chancellor, the great tactician, lacks the self-confidence and courage to follow her instincts in a crisis,” it said.

The timing of the election could hardly have been worse for Merkel’s centre-right alliance, which has ruled NRW since 2005.

Germans strongly oppose the €22.4 billion in loans over three years to debt-wracked Athens approved Friday as Berlin is struggling with its own parlous public finances.

Underlining the poll’s importance, Merkel scheduled 15 personal appearances in the state and staged a media blitz this week to defend the aid to Greece.

But the chancellor also faced accusations in Germany and abroad of dragging her feet over the loans and thereby exacerbating the crisis.

The Social Democrats abstained in Friday’s vote on the Greek rescue package.

And the NRW vote’s impact will be lasting, as it is the only state election this year.

“The chancellor and her ruling alliance face a rocky road ahead,” the business daily Handelsblatt said.