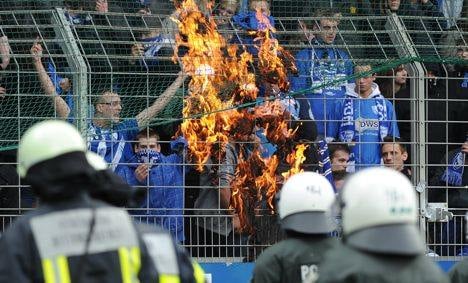 A total of 66 people, including three policemen, were injured in fighting in the town of Bochum in North Rhine-Westphalia on Saturday, following the relegation of VfL Bochum football club. The police have charged 21 people.

Bochum were relegated from Germany’s top division, the Bundesliga, on Saturday after being beaten 3:0 at home to Hannover 96. The result also meant that Hannover escaped relegation.

Several Bochum fans invaded the pitch at the final whistle, and attempted to attack their team’s players and stewards. Police used batons and pepper spray to drive back the attackers, who retaliated by throwing stones, cans and seats.

At the same time, around 200 fans protested outside the management offices behind the main stand. The police formed a chain behind the stadium in order to prevent further violence, and as the fans attempted to break through the line, the police used pepper spray to keep them back.

There was also violence in the old town centre of Düsseldorf, the capital of North Rhine-Westphalia, on the eve of the final second division match between Fortuna Düsseldorf and Hansa Rostock. Police arrested 160 fans after several fights broke out, with rioters attacking officers with glasses, bottles and fireworks. Fourteen policemen were injured.

A police spokesmen said that more than 90 percent of those arrested were Rostock fans. They had apparently travelled to Düsseldorf a day before the match in order to spend the night in local bars. Several had travelled by bus, while others had made the trip from Rostock by boat, arriving shortly before midnight.

The match has long been regarded as a risk by police, who had warned of possible violence in advance. Hundreds of officers are expected to be on duty around the stadium. Rostock will almost certainly be relegated to the third tier of German football for the first time in their history if they fail to win on Sunday.