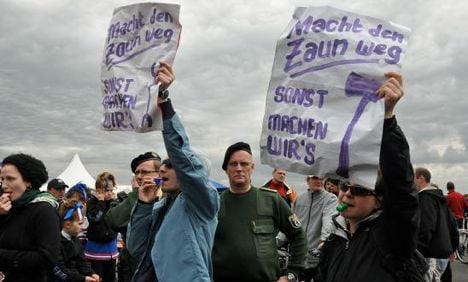 The demonstrators also attempted to disrupt the mayor’s speech with repeated chants and demanded that the fence around the 300-hectare space be removed.

An unnamed demonstrator said that protest was meant to warn against rising rents in the area, and added, “The park should be open for all, at night as well.”

The decision to install a fence has been criticized by left-wing groups and local residents. Demonstrations were also planned in local districts to draw attention to the socially disadvantaged allegedly being driven from the area.

Click here for a photo gallery of the park opening.

Berlin’s urban development senator Ingeborg Junge-Reyer attempted to quiet the demonstrators by saying they should try to win by arguments, not volume. She was applauded by many of those attending.

Wowereit used his speech to highlight the historical importance of the old airfield.

“The Allies risked their lives to secure Berliners their freedom. That will always be associated with Tempelhof,” he said, before adding, “This is the beginning of a fantastic development.”

The new Tempelhof park is the biggest park in the city, and some 200,000 visitors are expected to join the opening celebrations at the weekend.