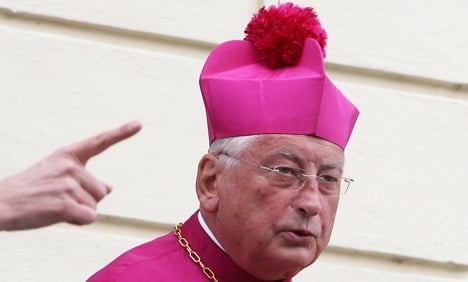 The Vatican’s move officially ends Mixa’s bishopric and probably his career in the church. A “diocese-administrator” is to be chosen by the local chapter on Saturday afternoon in Augsburg, pending the selection of a new bishop.

Karlheinz Knebel, general vicar of the Augsburg bishopric, called on his colleagues and congregation to protect the unity of the church “in this difficult time.”

“We are at a new beginning, and we must embark on it together,” he said.

State prosecutors in the Bavarian town of Ingolstadt opened an investigation into Mixa on Friday after child abuse suspicions were passed on to authorities by the diocese of Augsburg.

According to the Augsburger Allgemeine newspaper, the accusation related to Mixa’s time as bishop of the Bavarian city of Eichstätt, between 1996 and 2005. But further details about the alleged victim were not known.

Knebel said that the diocese had “taken responsibility, had acted and had informed the authorities.” This, he said, was in line with the German Conference of Bishops’ policy of “transparency and truth.”

Mixa had already tendered his resignation to Pope Benedict XVI last month because of persistent allegations that he hit and beat children while he was a teacher at Schrobenhausen children’s home during the 1970s and 1980s. Eight people who lived at the home have come forward with claims that he beat them with his fists, a stick and even a carpet beater.