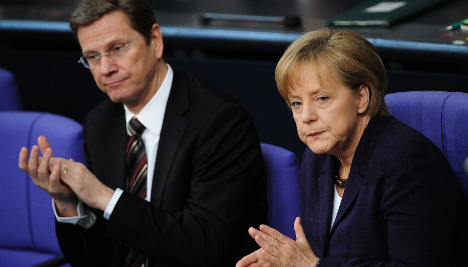 “Ensuring greater security for the euro was passed today with a large majority. This is a very important decision that makes clear that we will protect the single currency for our citizens,” Merkel told reporters.

“But it will only be effective in combination with the ambitious Greek austerity programme approved yesterday by the Greek parliament,” she warned.

After approval from the lower house, the upper chamber then passed the bill. President Horst Köhler signed it into law later on Friday, allowing Merkel to head to an EU summit with the legislation in place.

“We must defend the stability of the common European currency. That is what this is all about,” Finance Minister Wolfgang Schäuble said, adding that there was “great uncertainty among people and on financial markets, not just in Europe.”

Germany is set to provide €22.4 billion ($28.2 billion) in loans to Greece over three years, the largest eurozone contributor to a €110-billion package from the EU and the International Monetary Fund.

The deal has failed to soothe markets, with the euro hitting a 14-month low against the dollar and Japan and Australia expressing concern. Group of Seven finance ministers were due to hold a crisis conference call later on Friday.

Opinion polls have shown a majority of German voters oppose lending the money to Greece, but Merkel’s coalition had enough votes in both houses to ensure it would pass.

But a tight race in Sunday’s legislative election in North Rhine-Westphalia, Germany’s most populous state, could result in Merkel losing her majority in the upper house, eight months after winning a second term.

Mass-circulation daily Bild has dubbed the aid “the fattest cheque in history.” The latest survey showed 56 percent of voters thought providing aid to Greece was wrong.

“A bottomless pit has been opened,” said Joachim Starbatty, a retired economics professor from the University of Tübingen and a member of the group.

But the government has said it is confident the challenge will fail.

Merkel, who has also been accused in Germany and abroad of dragging her feet over aid to Greece and thereby exacerbating the crisis, wants an EU summit starting Friday to get the ball rolling on giving fiscal rules more teeth.

She and French President Nicolas Sarkozy issued a joint statement on Thursday ahead of the Brussels talks calling for a new “robust framework” for policing public finances.

But Sigmar Gabriel, head of the opposition Social Democrats (SPD), accused Merkel of “catastrophic failure” and of doing “long-lasting damage to confidence in the credibility of Germany’s European policy.” The centre-left SPD, until last year Merkel’s coalition partners, abstained in Friday’s vote because the bill did not oblige banks to contribute to the aid.

Instead, German banks and insurers are making a voluntary contribution, maintaining credit lines and bond holdings for three years. A Finance Ministry spokesman on Friday put the value of the contribution at €8 billion.