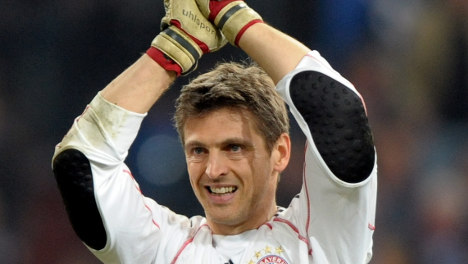 The 35-year-old won the last of his three caps in 2003, but has been in stellar form this season for Bayern Munich who are set to win the Bundesliga title on Saturday and contest the Champions League final on May 22.

With first-choice goalkeeper Rene Adler of Leverkusen out with a rib injury, Butt has been selected along with Schalke’s Manuel Neuer and Bremen’s Tim Wiese to contest the Number One shirt.

Having been Germany’s third-choice goalkeeper behind Jens Lehmann and Oliver Kahn at both Euro 2000 and the 2002 World Cup, Butt says he wants to enjoy the experience in South Africa.

“It is always a little bit special to be called up by the DFB (the German Football Federation) and I have already seen that in two previous tournaments,” he said.

“I am glad that I have made it, everyone wants to play at a World Cup. I will work hard in training.

“It is important in general to have a certain amount of experience in goal, but today I feel more like 25 than 35.”

In total, seven Bayern Munich players have been selected for the World Cup and Germany begin their campaign against Australia on June 13 in Durban.

As expected, Philipp Lahm, Bastian Schweinsteiger, Mario Gomez and Miroslav Klose are also in the initial 27-strong party for the tournament from 11 June to 11 July which will be cut to 23 by June 1 at the latest.

Chelsea midfielder Michael Ballack will captain the side.

Bayern’s Toni Kroos, who is on loan at Leverkusen and is returning to Munich for next season, has also been called up along with rising stars defender Holger Badstuber and forward Thomas Müller.

“I was surprised, but had counted on it a little,” said the uncapped 21-year-old Badstuber.

“I had already planned, but hadn’t booked a vacation. I wanted go and head to the sun, but I think the sun shines there too. Now it is up to me to prove myself, I will give it my everything.

“I think the national coach also sees me as a centre back, but I will play anywhere.”

Müller has already celebrated his first cap after the 20-year-old made his debut in early March in the 1-0 defeat against Argentina and was described by Löw as an “all-purpose weapon” in attack.

“Thomas is very flexible. His play is refined but also instinctive,” said Löw.

“He likes to come from deep, and he’s right in the thick of every attacking move. And he scores goals too, which is what makes him so valuable.”

But with Bayern’s potential treble still to play for and two cup finals, Müller says he just wants to concentrate on the next few weeks with his club, before thinking about his country.

“I had hoped to be in the team and I am pleased to be in the squad,” said Müller. “But the World Cup only interests me in three weeks time. I watched the draw on television and I only watched until I saw my name, now I just want to do as well as I can.”