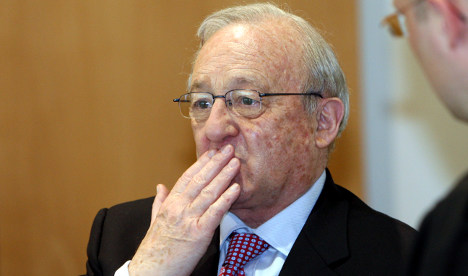 Karlheinz Schreiber, 76, who holds dual Canadian and German citizenship, was found guilty of withholding more than €7.5 million ($9.7 million) in taxes between 1988 and 1993.

Presiding Judge Rudolf Weigell said he wanted to disprove the prejudice that in such cases, “you fry the small fish and let the big fish go free.” Schreiber “bribes anything and anyone when things are not going well and then defrauds the state anyway he can,” Weigell added.

The only thing counting in his favour, the judge said, was his age and the fact he had no previous convictions.

Upon learning the verdict, Schreiber flashed a brief smile and said: “All the best to you all and to your families.”

Prosecutor Reinhard Nemetz said he was “satisfied” with the outcome, but defence lawyers Jens Bosbach and Jan Olaf Leisner told reporters: “At the moment, we assume that Schreiber will appeal the verdict.”

Schreiber, who was arrested in Toronto in 1999, had fought off extradition attempts for 10 years until he was finally handed over to German authorities last August.

Prosecutors had called for a nine-and-a-half-year jail term on charges of tax evasion and obtaining illegal advantage but he was acquitted on the latter charge, as it had passed the statute of limitations.

Schreiber played a central role in a sprawling slush-fund affair that rocked the Christian Democratic Union (CDU) party in the 1990s and tarnished the legacy of former chancellor Helmut Kohl.

At the height of the scandal, Merkel wrote an editorial in the Frankfurter Allgemeine Zeitung daily in 1999 calling for Kohl to come clean over the funding scandal and for the party to break with its murky past. Merkel’s willingness to challenge her former mentor during the scandal rapidly inflated her meagre profile and she was elected head of the CDU the following year.

The verdict risked bringing back bitter memories for the party only four days before a key regional election that could cost Merkel’s coalition its majority in the Bundesrat, Germany’s upper house of parliament.

There were some concerns among Merkel allies that Schreiber could dredge up more dirt on the scandal ahead of the election but the fears proved unfounded. Schreiber was also embroiled in a scandal involving former Canadian Prime Minister Brian Mulroney, who admitted in 2007 that he had accepted $225,000 in cash from him after leaving office.

The former leader insisted this had been a “mistake,” not wrongdoing. He said he was paid to lobby foreign politicians to buy Thyssen light armoured vehicles that Schreiber was trying to have built in Canada.

Canadian federal police had first accused Mulroney in 1995 of accepting kickbacks from Schreiber for the purchase of Airbus jets for carrier Air Canada in 1988.

Mulroney subsequently sued the Canadian government for libel and, under oath, denied any illicit dealings with Schreiber. He received a government apology and a $2.1-million settlement and the case was closed.